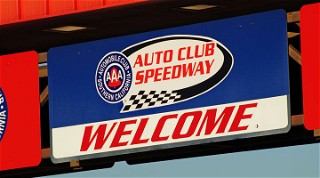 FONTANA, Calif. (January 30, 2016) – Moving from two events in early January in Florida to the opposite coast, the SCCA Western Conference Majors Tour opened up with Round One at Auto Club Speedway on Saturday in Fontana, Calif.

Following a Friday afternoon and Saturday morning qualifying session to set the grids, each of the 28 Runoffs eligible classes raced in 25-minute timed races on Saturday on the combination high banked oval and infield road course in the Southern California facility.

The Formula F class used the high banks of the speedway to even out their battle, and settle it in the infield. Though Chuck Horn started on pole in the No. 54 Hotel California/Porter Racing Swift DB6/Honda and led most of the way after being swallowed up at the start, he found Denny Renfrow on his gearbox with just a couple of laps remaining in the race. With two to go, Renfrow’s No. 11 Wheely Open Racing Piper DL7/Honda turned a track record lap to catch up to Horn.

On the white flag, Renfrow moved to the lead in Turn Three, but Horn overtook the top spot by the next corner and held on to the checkered flag, winning by a nose and just 0.168-second.

Spec Miata took advantage of the same drafting situation, with three cars remaining out front in the final half of the race, with all three taking turns in the lead. The official leader on lap five was the No. 80 RM Autosports/Oakley/Crow Enterprizes Spec Miata, but Steven Powers used the draft to move his No. 45 Amerifirst Financial/miatacage.com/East Street Racing Miata into the lead a lap later. With Powers in front of the field, he and Clement Lee’s No. 33 RM Autosports Miata made side to side contact in a racing incident, with Powers holding the top spot.

Dean Busk’s No. 7 Commercial Brokers, Inc. Miata made the fight a four way battle at the white flag, with Lee now in front after making the pass stick with two to go. Lee led the way on the final lap, followed closely by Powers and Dickerson.

Round 2 of the Western Conference Majors Tour continues on Sunday with 18-lap races beginning at 9:05 a.m. PST.

FONTANA, Calif. – Provisional race winners from Saturday’s Round One of the SCCA Western Conference Majors Tour at Auto Club Speedway, with Class: Name, hometown and car.