Round Three of the Southeast Majors Tour Gets Sunshine, Race Winners 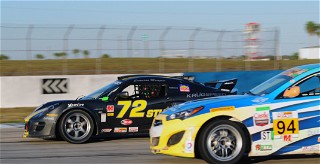 SEBRING, Florida (January 16, 2016) – The unpredictable Florida weather was all sunshine on Saturday for Round Three of the SCCA U.S. Majors Tour at Sebring International Raceway, where 26 drivers earned wins and the 25 championship points.

Darren Seltzer started on the B-Spec pole in the No. 6 BFG Racing/HPD/Dynasty Auto Honda Fit, but just a few laps in had the No. 0 Dynasty Automotive/BFG Racing/HPD Honda Fit of teammate Chi Ho in his mirrors. The pair swapped the lead position 10 to 15 times throughout the race, with Ho holding the top spot coming out of the final corner and racing for the win.

Making his Majors debut, Vincent Allegrata’s No. 07 Ave Motorsports/TA Sights and Sounds Chevrolet Corvette made a late pass to move around Simon Gregg’s No. 59 Gregg Motorsports Chevrolet Corvette, then held the position as the race fell under a full course caution to the checkered flag in GT-1.

The group traditionally known as “wings and things” – Formula Atlantic, Formula 1000, Formula Enterprises, Formula Mazda, Prototype 1, and Prototype 2 – had a challenging day as Group Six. After a lap two incident brought out a black flag and a restart of the race, a second incident on the opening lap of the restarted race brought out a full course caution, well after the group’s allotted 25 minute time.

With the final two races shortened to 20 minutes from the 25 as darkness approached, Cameron Maugeri kept his No. 72 Krugspeed Lotus Exige in front of Mike Flynn’s No. 94 Irish Mike’s Racing/BFGoodrich Tires Hyundai Genesis for the Super Touring Under win.

With darkness falling quickly, Robert Allaer’s No. 52 LTD Motorsports/Martini/Molson Van Diemen RF02/Ford capped the day with an overall win in Formula Continental. Just behind, however, Skylar Robinson crossed the stripe with a nose in front of Peter Dempsey in Formula F. Robinson, who piloted the No. 1 K-Hill Motorsports Mygale/Honda to the win, previously drove in England in Formula Ford for Dempsey’s father.

Round Four of the Southeast Conference Majors Tour continues on Sunday with 14 lap races at Sebring for all seven race groups. Live Timing, notes and more can be found at SCCA.com.