What to Watch: Homestead Majors 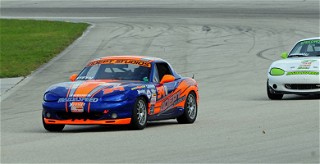 The Majors at Homestead-Miami Speedway are this weekend. Here are some stories to follow throughout the next three days if you are keeping score at home:

Back-to-Back in the Sunshine State: For the third consecutive year, Florida plays host to the opening two weekends of U.S. Majors Tour action. The two-stop state tour begins at the Homestead-Miami Speedway and wraps up at historic Sebring International Raceway, in the middle of the state. Say goodbye to Old Man Winter and hello to short-sleeved shirts as temperatures are forecasted to be just below 80 degrees.

Spec Miata Leads the Way: Spec Miata racers up and down the East Coast are ready to forget about winter and get the racing season heated up. With 55 entries, the group is the largest single class of cars to hit the track. In addition, Spec Miata will lead both days of competition. In a class that is well known for its competitive fields and close finishes, it will be a great way to commence the 2016 season.

Defending Southeast Conference Champion Danny Steyn will be in attendance, however hot shoes such as Jim Drago, Selin Rollan, Blake Clements, Alex Bolanos, Todd Buras and Nick Leverone will be gunning for the top position.

The large number of cars should produce some entertaining racing everywhere on the track. An added challenge for drivers, and a point of interest for spectators, will be the speed differential between some of the classes. As this race group features a variety of cars, strategic and clean passes will be at a premium.

Attached: Danny Steyn had a difficult opening weekend at Homestead last season, as his car was found to be out of compliance to the rules, but will look for a better start to this season’s campaign.
Credit: Mark Weber