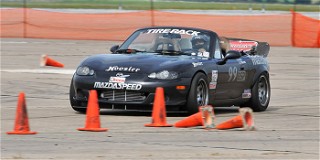 The season kicks off, as it has traditionally done, with the Dixie Region Championship Tour event, March 18-20.

The Championship Tour, which runs the traditional autocross format scoring the best time from each day, will also make stops at Crows Landing, California (April 22-24) before heading to Lincoln, Nebraska, for the Spring Nationals, May 28-30. The tour then winds east to Washington, D.C. (June 24-26) before going to College Station, Texas (July 1-3) and Packwood, Washington (July 8-10). The Championship Tour wraps up with back-to-back events at Wilmington, Ohio (July 8-10) and La Junta, Colorado (July 29-31).

The Tire Rack Match Tour, in its fourth year, will be the second series of events to roll from the start line at the Oceanside Showdown in San Diego (April 1-3). The next stop for these series of events is the Thunder Valley Showdown, in Bristol, Tennessee (May 13-15), followed by the Heartland Showdown, in Topeka, Kansas (June 10-12) and the Iron City Showdown in Birmingham, Alabama, (June 17-19). The season wraps up at Pittsburgh International Race Complex with the Heavy Metal Showdown, in Wampum, Pennsylvania (July 15-17).

The Tire Rack ProSolo series is the third to begin the 2016 campaign, with an initial stop at El Toro, California (April 8-10). The series of events is then in action for three consecutive weeks with events at Crows Landing, California (April 29-May 1), the first stop at Wilmington, Ohio (May 6-8) and then a stop in Washington, D.C. (May 13-15). The next round of three events starts at the Spring Nationals in Lincoln, Nebraska, (May 26-28), followed by Mineral Wells, Texas (June 3-5) and Toledo, Ohio (June 10-12).

The last three ProSolo events leading to the Finale will take place at Packwood, Washington (July 15-17). The regular season is capped off with back-to-back weekends in Wilmington, Ohio (July 29-31) and Blytheville, Arkansas (Aug. 5-7). The Tire Rack ProSolo Finale will take place Labor Day Weekend (Sept. 2-4), at the Lincoln (Neb.) Airpark.

In a change from last year’s Tire Rack ProSolo scoring, points from the top two finishes of all ProSolo events run during the season will count toward the year-end totals. In years past only the two best of the first four events were counted toward the season-long totals.

The 2016 Solo season will be punctuated with the 44th Tire Rack Solo National Championships, at Lincoln (Neb.) Airpark, Sept. 6-9.

Additional information on the Tire Rack National Solo Program can be found at SCCA.com.

*Editors Note: Heartland Park evnet has been added to the schedule.