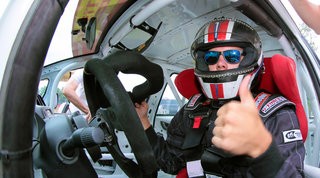 Most kids with the dream of becoming a racecar driver end up having to give it up. They either lack the talent or the funding or don’t get started early enough. But what happens when you don’t give up because of one of those things? You keep trying until your dream becomes reality.

That’s exactly what Tom O’Gorman did in order to go from Solo National Champion to professional racecar driver in just two years. In 2013 O’Gorman won his Solo title, but dreamed of racing on a road course, not an airfield. So, he bought an Improved Touring C Honda Civic and set out in Club Racing for the 2014 season. In 9 starts, he collected 8 wins, including the prestigious American Road Race of Champions at Road America.

Tom was feeling his dream becoming reality, but he wanted to the next step. He wanted to be a professional driver. As a joke in April of 2015, a friend posted a B-Spec Honda Fit for Sale and told Tom he should buy it. He did. After asking a million questions and learning more about the Pirelli World Challenge series, the only thing standing in the way was money. About $8,000 to be exact.

When most would have given up or begged every relative for a donation, O’Gorman went a different direction and looked into crowdfunding. He knew people would need an incentive to help. So, for $25 you got your name on the car in vinyl and for $50 you got a TOMO Racing T-Shirt. This stunt raised nearly $7,000. The last $1,000 came from sponsors such as his family’s business, Full Throttle Indoor Karting in Cincinnati, OH, Black Armor Helmets, and Track Night in America.

Just over $1,000 from sponsors, the rest from friends and random supporters.

Tom ran two Pirelli World Challenge weekends on that budget: Mid-Ohio Sports Car Course and Mazda Raceway Laguna Seca during the 2015 season. In those two weekends, he ran consistently at the front of the field, led laps in a televised race, and earned a podium finish. Well done Tom, well done.

Head to Road & Track to see the full story.