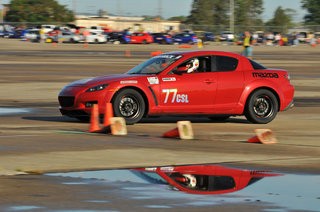 TOPEKA, Kan. (Oct. 9, 2015) – The Solo Triad Award has come to symbolize the best of the best in the SCCA Solo world. This year is no different as only seven of 75 class winners were able to complete the feat.

In Super Street, Patrick Salerno, of Danbury, Connecticut, completed his bid for a Solo Triad Award with a 0.990-second win over Jacob Dawson at the SCCA Solo Nationals Presented by Garmin VIRB. Leading up to Nationals, Salerno scored victories at the Championship Tour events in Ayer, Massachusetts, and Wilmington, Ohio.

Dave Ogburn, of San Angelo, Texas, completed the three legs of the Triad with a win in C Street, at Nationals. He drove his car to a 0.453-second victory after winning Champ Tour meets in College Station, Texas and Fountain, Colorado.

Rachel Kerswill, of Reno, Nevada, also completed the trifecta at Nationals with her dominate 4.309-second win in in C Street Ladies. Kerswill won Championship Tour events in San Diego and Crows Landing, California, on her way to capturing the award.

G Street witnessed a Solo Triad awarded following Nationals. Mark Scroggs, of San Ramon, California, clinched the title by setting a quick time during his first day of competition. He followed that up with a class-leading lap on the final day of competition. Scroggs also took wins at the San Diego and Crows Landing Championship Tour events.

In G Street Ladies, Laura Harbour, of Stamping Ground, Kentuckey, took home the triad after setting the quick lap of the class on her first run. On the second day of Nationals, Harbour was not as quick but had built enough of a gap to clinch the win by 0.45-second. Harbour also won her class at the Moultrie (Georgia) Match Tour and Wilmington (Ohio) Championship Tour.

Steve O’Blenes, of Garden Grove, California, collected a scant 0.961-second victory in B Street Prepared. O’Blenes mounted a comeback on the second day of competition to get around Christopher Edens. To capture the award, O’Blenes won the Crows Landing, California, Championship Tour and Farmington, Utah, Match Tour.

In E Street Prepared, Brian Peters, of Litchfield Park, Arizona, completed the finishing touches on his Solo Triad Award with a 2.655-second win. Peters completed parts one and two of three at the San Diego and Lincoln, Nebraska, Championship Tours.

An entire list of winner at the Tire Rack SCCA Solo National Championships Presented by Garmin VIRB can be found at SCCA.com/solonats.

Additional information on the SCCA Solo program can be found on SCCA.com.