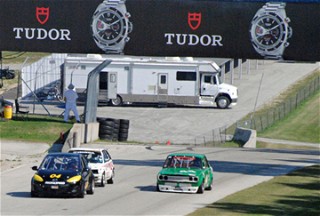 ELKHART LAKE, Wis. (July 25, 2015) – The slipstream draft proved to make or break the hopes of many drivers looking to notch wins in Round Nine of the Northern Conference SCCA U.S. Majors Tour, part of the SafeRacer Club Racing Program. Less than ideal track conditions drew the front runners in many classes closer together for extended periods during each group’s 20-minute races.

Another factor that led to close racing was warm July temperatures, as a result of nearly cloudless skies over the 4.048-mile, 14-turn road course. The sun warmed the asphalt to the point where many drivers felt it was too slick to put the throttle down as they would like.

Group One featured a close Touring 2 battle between Mark Boden, of Buffalo Grove, Illinois, and John M. Buttermore. In his No. 4 BMW M3, Boden crossed the finish line just 0.434-second in the lead. The win marked Boden’s first in the Northern Conference points chase.

Group Two offered a pair of victories that were decided on the last lap of the 10-lap race. On all but the last go-around Herb Nobel was the class leader, but following a pass that utilized the slip stream William B. Cobb, of Cambridge, Wisconsin, rode his No. 28 Clueless Racing CNB Milton Bana to the Formula 500 win.

The story in Formula Vee was quite different. Bruce Livermore, of Stillwater, Minnesota, came out on top of a three-car breakaway to the finish. Heading into the final lap, Livermore led the closely-contested, three-car battle and was able to place his No. 37 BBBuilds/Veetech Mysterian X-M2 in the right place at the right time to take the win.

Group three produced another race decided on the final circuit of the course. Michael Froh, of Elkhart Lake, Wisconsin, scored the F Production win after getting around Michael Hart following the white flag. Hart turned his fastest lap of the race on the last lap, but it wasn’t enough to keep Froh, in his No. 72 Mazda Miata, behind him.

Group four also showcased an extremely close race in American Sedan, of which Philip Smith, of New Albany, Ohio, came out on top. In his No. 47 Hoosier Tires/Ilmor Racing Chevrolet Camaro, Smith crossed the line with Edward Honsni only 0.686-second arears.

Based on the finishes seen in the first four groups, it only stood to reason that the 27 drivers in the Spec Miata field would put on a show worthy of note. Kyle Webb, of Centerville, Ohio, was the first to pass under the checkered flag, but it was no easy win. Webb drove his No. 99 Nova Brown not forgotten/ATL Speedway Mazda Miata to the win, but only 0.043-second ahead of Justin Hille, with Justin Elder less than 0.6-second behind. On Lap six of eight, it looked like Webb may not be in the right place to capture the win as he was shuffled back to fourth. But he was able to claw his way back to the front and score his second Northern Conference win.