Majors Trio on Tap for this Weekend 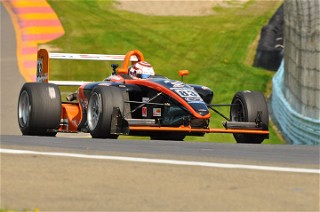 Here are some story lines to watch:

Spec Racer Spectacular: A total of 36 Spec Racer Fords will take to the track out in New Jersey. That includes 10 SRF Gen3s, while the rest are the second generation SRF cars. The popular class, known for its close racing, should prove to be an interesting one with all the cars on track.

Northeastern Conference Championship leader in SRF, Mark Vultaggio, and second-place Bruce Myers will be battling for the season-long point lead on track. Greg Obadia currently sits second in the SRFG3 class, while Scott Rettich is not on the entry list. With a good performance, Obadia could inherit the point lead before the final weekend of conference competition at Michigan International Speedway.

Big-Bore Bonanza: The big-bore formula and sedan groups are both well subscribed at Road America as we are in the home stretch for the 2015 season. A total of 35 cars are scheduled to take to the track during the large-bore formula group, while 28 ground pounders are on the entry list.

Of those groups, there will be 11 GT-1 cars doing battle at Road America, while an equal number of Formula Enterprise cars are scheduled to start in the big-bore formula race. Two of the fastest classes in SCCA Club Racing should prove for some great viewing for all in attendance.

Mid-States Conference Championship Picture: The Formula Atlantic title will be in play this weekend as Championship-leader Tyler Hunter, and second-place Dwight Rider are on the entry list. Rider currently sits 21 markers behind Hunter, so Hunter just needs to keep his nose clean in order to stay at the top of the leader board…The Formula F title will be decided on track this weekend as Bill Kephart and Max Mallinen are the two drivers with the best chance to swoop around current leader Stephen Meyer…Provided there are no last-minute entries, and he is able to keep his car running until the end, Larry Howard has a chance to jump three spots in the title chase…In F Production, Eric Prill and Kevin Ruck will sort out the top two positions in the Mid-States Conference chase. Currently, Ruck trails by 18 points but could change things with a pair of strong runs…R. Douglas McKie has a chance to seal the Formula Vee Championship, but will need two wins in the closely-contested and unpredictable class…Bruce Gurney could take the Prototype 2 title from Jack Donnellan as Donnellan is not currently on the entry list for Pueblo…

Live timing, audio, video, and updates from these events are available at scca.com/live

Attached: Garth Rickards scored two wins in Formula Atlantic at Watkins Glen and will have the chance to repeat that feat this weekend, at New Jersey Motorsports Park.
Credit: Ken Brown