RACER does Track Night in America 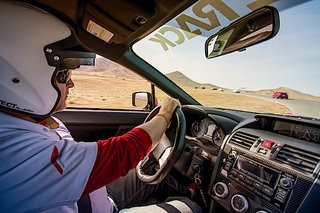 It calls to all with gasoline in their veins: You and your car, an hour of track time during a 4 p.m. to 8 p.m. window, on a weeknight – all for just $150. And rulebooks? They don’t exist. Run what ya brung, have a blast, repeat. It’s a winning formula. At least, that’s what SCCA’s latest program is gambling on.

low-commitment, easily accessible time on the race track in just about any street car. But this isn’t just another day at the track.

Track Night’s journey from concept to reality was not a short one, explains SCCA’s Director of Experiential Programs, Heyward Wagner: “The idea was born in SCCA’s marketing department about five years ago,” he says. “At that time, we didn’t have a department to execute a program of this scale. When the Experiential department was created last spring, Track Night was one of the very first ideas that was brought to us, and we loved it.”

The first Track Night took place April 6, 2015 – one year and six days after Wagner’s department was formed – and was made possible in large part thanks to a grant from the FIA and sponsorship from longtime SCCA partner Tire Rack.

What’s different about Track Night? For starters, unlike almost every other track day, Track Night takes place during weekday evenings, usually Tuesdays or Thursdays, with a sticker price of $150 (less if you search online for a discount code). Track Night also encourages spectators, offers free parade laps halfway through the event, and welcomes groups – like SCCA Regions, local scouts, and so on – to host gatherings at the track for free. At most venues, Track Night will occur the same time each month for several consecutive months.

“The program is designed to be fun, easy and accessible for seasoned veterans and rookies,” says Wagner. Hosting the events on weekdays means that enthusiasts who are hyper-scheduled on weekends can break away from work  a little early to hit the track.

“The target demographic is people who want to have fun with cars,” he continues, noting that Track Night is primarily designed to attract race track novices. “We would love to see Track Night as a tool to introduce SCCA to people who may not have been involved before. And, so far, we have been successful with this, as 57 percent of our first 1,000 entrants were not previously members.” Of those, 42 percent were also less than 35 years old.

Around 80 SCCA Track Nights are slated to take place during 2015, with the program continuing into 2016.

“The FIA grant is only for 2015, but we are committed to the program in 2016 and beyond,” says Wagner. “We would like to see an increase in events by 20 each year. That will likely include events in the off-season at some venues, as well as adding new tracks.”

The schedule of an average Track Night has participants arriving at the track between 3 p.m. and 4 p.m., and being on the track soon thereafter. There are waivers and tech sheets, but that’s a simple process that the Track Night staff assists with.

There are some other things to know before heading to the track, however. Bring long pants, closed-toe shoes, and a hat, sunscreen and water. Some tracks allow you to run in short sleeves while others mandate long sleeves – we’d recommend the latter. You’ll also need a helmet with at least a Snell SA2000, M2000, K2005, K98, or FIA 8860-2005 rating. Should you not have a helmet, one can be purchased during Track Night’s online registration at www.TrackNightInAmerica.com.

Your vehicle will also need attention. “Clean out all the miscellaneous junk in your car at home,” advises West Coast Track Night Event Manager Eric Clements. From there, check all fluids, brake pads, and torque the lug nuts. “Less than two-year-old brake fluid is good – and if you’re not mechanically savvy, it’s a good idea to get a cheap or free multi-point inspection.”

Words by Philip Royle for RACER