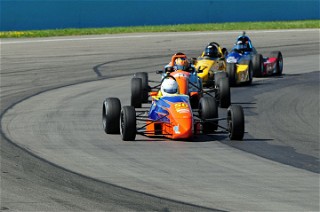 We’re celebrating Independence Day with Majors at Watkins Glen, Portland, and High Plains. Live timing and updates from all three are available at scca.com/live.

The Majors at historic Watkins Glen International has attracted some large fields across all classes. At this point, Formula Vee (19), Formula F (14) and Super Touring Lite (24) are some of the largest fields outside of the traditional large turnouts for Spec Miata and Spec Racer Ford classes. As the Championship chase in the Northeastern Conference heads into its second half of the season, competitors are making their mid-season push for points. Making hay in the standings, now, may mean the difference between celebrating a Conference title and coming just a couple points short in the final tally.

The Freedom Sprints, held at High Plains Raceway, have become an Independence Day weekend staple for amateur racers around the country. The course at High Plains offers a challenge to drivers of all skill levels. A variety of turns, in addition to some significant elevation change, make for unique layout not seen at other racetracks. The course gives each driver a tour of the rolling foothills of the Rocky Mountains.

In addition, this event is the penultimate destination for the Mid-States Conference Championship. Drivers in contention for titles will push hard to earn maximum points before the series closes out at Pueblo Motorsports Park.

Portland International Raceway will play host to the final two rounds of racing for the SCCA Majors Western Conference Championship. With many class titles still on the line, the racing should be fierce and entertaining.

Here are some of the title fights to keep an eye on…In Spec Racer Ford, John Harris has a chance to jump to the top spot in the class, but will have to hope for some bad luck from current point-leader Paul Raby…B-Spec will feature an on-track battle between Derrick Ambrose and Eric Boucher for the class title…As the only Spec Miata on the entry list, thus far, Marco Gallaher should be able to surpass Lee in the drivers’ standings…In GT-2, Scotty B. White will be able to make up some places in the standings, but mathematically cannot claim the top spot…Collin Jackson has the opportunity to claim the GT-3 Championship if he finishes last in class, as the entry list sits currently…Michael Ottis and Larry Mason will decide the Formula Mazda Championship during this weekend’s event as the two drivers are separated by 15 points…Formula F will also be sorted out at Portland as the two drivers are separated by only 11 markers…Dennis Andrade mathematically can claim the Western Conference Formula Vee crown…In Touring 3, Lansing Stout and Tom Wickersham will decide first and second places on the season as they leapfrog Anthony Lanza.