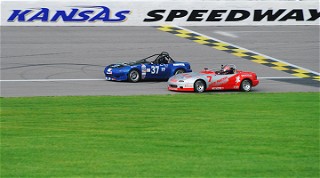 Kansas City, Kan. (June 20, 2015) – Through sun and rain, the Eighth Round of the SCCA Mid-States Majors Tour on Sunday at Kansas Speedway provided drivers with an array of challenges, some like only Mother Nature can provide. Twice through the day, workers were called in from their stations due to lightning in the area. The drivers, teams, and workers embraced these challenges, making for a phenomenal day of racing during a first-time event at the driver-approved track.

The big bore group had a wet track, with the race starting just after a short delay due to lightning in the area, the drivers were given a chance to change to rain tires after the worst of the storm passed. The father/son duo made the decision to go to the Goodyear rain tires too late, leaving them to tackle the wet track on slicks in the high horsepower machines. 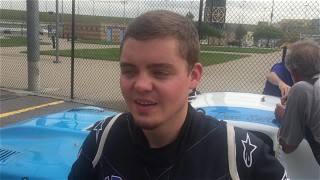 The younger Smith started on pole based on his faster time from yesterday’s race. Because of the slick track, both fell back at the start in the overall battle as the drivers with rain tires charged forward. Once on their own, the Smiths initiated an independent race, with both becoming more comfortable with the conditions as the race progressed.

On the second lap, the elder Smith took the lead and held on for four laps before being passed by his 20-year-old son. The pair officially swapped the lead four times early, but there was no stopping the younger Smith once he claimed the lead on lap eight. He held his position through the checkered flag, claiming the Eighth Round of the Mid-States Majors Tour.

Just before the Smiths were faced with their tire dilemma, the F Production race was a showdown between three Mid-States drivers who are contenders for a Runoffs presented by Garmin VIRB crown this September at Daytona.

Eric Prill, a Runoffs podium finisher in five of the last seven years, mixed and matched with Sam Henry – a Runoffs runner-up, a Solo trophy winner, and a RallyCross National Champion – and Kent Prather, an eight-time National Champion.

Prill’s No. 7 MaxtonsFight.Org/Jesse Prather Motorsports/Hoosier Mazda Miata officially led 18 of the 21 laps at the stripe, but Henry crossed the stripe in front on lap six, seven and 17. That’s a misleading statistic, however, as the lead swapped several times throughout the race, with Prather’s No. 26 Prather Racing MG A even slipping past the two Miatas briefly on the banking. 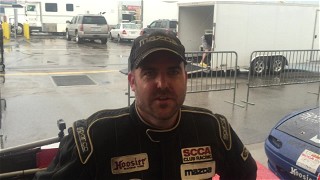 Henry’s experiments in the draft with the No. 37 Springfield Dyno/SafeRacer Mazda Miata allowed him to lead several times and establish the class track record at 1:31.702 – a half-second quicker than Prill, who led around the 1.5-mile oval.

Prather fell back of the leaders, dropping two tires off in the dirt on lap 10, and then a rainstorm and thundershower slowed the pace with three laps to go. Prill brought his red and silver Miata home in front for the checkered flag by 1.887-seconds after the back and forth battle.

Results and more information from the Kansas Speedway Majors can be found here.

Interviews from each of the race winners, post-race, can be found at SCCA.com.

The Mid-States Conference returns to action on the July 4th weekend at High Plains Raceway in Byers, Colo. The Western Conference finale, at Portland International Raceway, and the Northeast Conference, at Watkins Glen International, are also in action that same weekend.

Image: Eric Prill and Sam Henry battled back and forth in F Production on Sunday at Kansas.