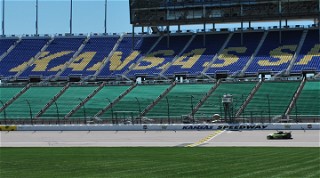 Kansas City, Kan. (June 19, 2015) – The SCCA Mid-States Conference used the 2.370-mile road course at Kansas Speedway as a tune up for the end of the season SCCA National Championship Runoffs presented by Garmin VIRB at Daytona International Speedway, running Round Seven on a hot, humid Saturday.

The final two laps of the Formula Vee race were as hot as the pavement in the Kansas City sunshine.

It started with two laps to go, when Robert Neumeister thought he had the win in the No. 94 Hoosier Tire Vortech/Volkswagen. Neumeister got to the stripe just a nose in front of his battle with Charles Hearn and Bill Johnson, then relaxed – mistaking the white flag for the checkered flag.

Hearn, in front coming off of NASCAR’s turn four, moved his Vortech to the lowest spot on the apron to try to hold on for the win. Johnson tried to dip even lower, and the two came together on the straight.

Both spun, with Johnson coming to a rest on the apron and Hearn stopping against the wall at the top of the banking, minus two wheels, just three feet short of the finish line.

The contact left Neumeister free to cross the stripe and get the win.

Close races are often characteristic of the spec classes, and the Majors at Kansas Speedway was no exception. Spec Racer Ford and Spec Miata were tightly contested, with the leaders coming around several laps bumper to bumper on the straightaways.

The group’s split start was delayed one lap as a car from the SRF split slowed during the pace lap, meeting up with the Spec Miata pack that followed behind. The pace cars maintained their position for another lap and gathered up the straggler. After an additional pace lap, both splits were able to take clean starts and begin their races.

Grayson Strathman started on the pole in his No. 19 Monster Energy Spec Racer Ford. The racing remained close between Strathman, Richard Wiese in his No. 35 machine, and Jim Cote, Jr. in his No. 20 Micro-Comm, Inc. SRF throughout the first half of the race, although the order remained the same.

Near halfway, Strathman began stretching out his lead, giving him firm control over the race. By the checkered flag, Strathman led flag to flag and had a six-second margin of victory.

In the Spec Miata race, polesitter Christopher Haldeman controlled the group with his No. 72 Mazda Miata as they headed to the tight turn one at Kansas Speedway. Haldeman set a strong pace, earning him the track record in SM, closely followed by Michael Ross in his No. 22 TPR Consulting/X-Factor Racing/Miata who spent many laps glued to the rear bumper of Haldeman.

Haldeman was able to hold the lead from green to checker, capturing the victory. Matt Reynolds, in the No. 71 Reynolds Bros. Racing/Vintage Connection/JPM/Miata, finished off the top three in SM.

Interviews from each of the race winners are available here.

Results can be found here.