Ebbens, Schofields Show That SCCA Is Truly A Family at the June Sprints 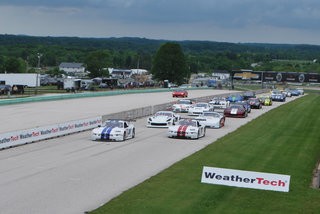 ELKHART LAKE, Wis. (June 14, 2015) – The Sports Car Club of America is a family affair. That showed in a Major – pun intended – way on Sunday at the WeatherTech Chicago Region SCCA June Sprints at Road America, where brothers Brian and Derek Schofield and Cliff and Jim Ebben were four of the 23 winners crowned on Sunday. The June Sprints are Rounds Seven and Eight of the Northern Conference Majors Tour.

A half lap behind, brother Derek held off a pack of five cars to the stripe to take the Spec Racer Ford class win in the No. 60 PM Racing machine. The two, and their team, celebrated on the podium together, and both agreed that it will make the long ride home to Lakeland, Fla., much more enjoyable.

The Ebbens have a much shorter drive, as Road America is their home track, but the celebration will be just as raucous.

Despite a full course caution that shrunk his gap, Cliff Ebben marched his No. 36 Lamers Motor Racing/McMahon Group Ford Mustang to a walk away GT-1 win under a warm, sunny afternoon.

Jim Ebben took advantage of contact between Toby Grahovec and Voytek Burdzy to move into the Touring 4 lead, and held on in the No. 1 Mazda/Hoosier/Hawk Mazda MX-5 to complete an Ebben family sweep just down the road from their Appleton, Wis., home.

Video interviews from each of the race winners from the June Sprints can be found in this article.