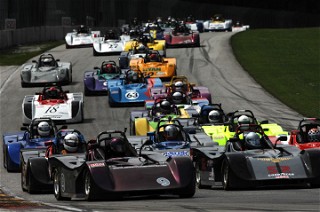 CHICAGO, Ill. (June 11, 2010) -- Chicago Region SCCA has announced that it will institute a spec fuel rule for the Spec Racer Ford class at this years WeatherTech Chicago Region SCCA June Sprints, June 25-27, 2010 at Road America.Additionally, it announced that it would waive late fees for any SRF entering the event after June 10.In a letter to competitors, Chief Steward Mike Smith noted, In response to numerous requests and a concern for safety of competitors and volunteers we will institute a spec fuel for the entire SRF class at the 2010 Weather Tech Chicago Region SCCA June Sprints. 2010 will be a test to see if more classes would like to see this happen and to monitor the ill effects of some serious fuels that may cause many respiratory problems for competitors, volunteers, and spectators.The letter continued to specify that the Region will have an exclusive 93 octane tank at Road America for SRF competitors, and all SRF competitors will be required to acquire fuel from that tank.A full version of the letter is available at http://www.junesprints.com/2010/chiefsteward_message.html.-30-