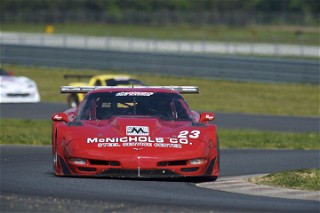 TOPEKA, Kan. (June 30, 2010)  Organizers from the SCCA Pro Racing Trans-Am Series today announced a new incentive for current SCCA Club Racing GT-1 competitors to receive a free entry to the 2010 National Championship Runoffs at Road America from Sept. 20-26 by competing in upcoming Trans-Am races. Any GT-1 competitor that contests two Trans-Am Series races will receive a free entry for the Runoffs, courtesy of SCCA Pro Racing. The program gets underway with this weekends fifth round of the 10-race Trans-Am Series at Lime Rock Park on July 3. Weve seen a number of GT-1 drivers and teams come into the Trans-Am Series and be successful, and we are encouraging more of them to come and give Trans-Am racing a try with this new program, said SCCA Pro Racing President & CEO Bob Wildberger. There is great synergy between GT-1 and Trans-Am and there are virtually no differences between the cars. We have a lot of great venues coming up over the second half of the Trans-Am season on great weekends. Here is an invitation to GT-1 competitors to come out and be a part of it. Regular GT-1 competitors have found their way to the Trans-Am podium in recent events. At Road America on June 20, Amy Ruman, of Kent, Ohio, capped an outstanding drive through the field in the 23-lap race with a third-place trophy behind current Trans-Am point leader and race winner Tony Ave and second-place finisher RJ Lopez. It was the second Trans-Am podium result of Rumans career. Last month, Canadian racer Blaise Csida, of Stouffville, Ontario, earned his first career Trans-Am podium with a third-place outing at his home track, Mosport International Raceway. Csida followed race winner Kenny Wilden and Lopez, who again finished second, across the stripe. I cant describe it, said Csida following the Mosport race. Ive been working towards this for 10 years. As an amateur, we have such limited resources and to be standing beside somebody like Kenny Wilden and RJ, for me as an amateur club racer, its unbelievable. All I can say is I highly recommend it to any amateur racer who wants to step up and learn something from these guys. This is the best series to try to improve your skills. Drivers wishing to take advantage of the free entry will still need to complete the full Runoffs qualification requirements per the Club Racing General Competition Rules. Next up for the 2010 SCCA Pro Racing Trans-Am Series is this weekends race at Lime Rock Park alongside the NASCAR K&N Pro Series and the Whelen Modified Tour. The Trans-Am race takes the green flag at 4:45 p.m. on Saturday, July 3. The Series continues to the Honda Indy Toronto July 16-18, Autobahn Country Club July 30-Aug. 1, Brainerd International Raceway Sept. 5-6 and VIRginia International Raceway Sept. 10-12. The season concludes a week after the Runoffs, Sept. 29-Oct. 1 at Road Atlanta. About Trans-Am The SCCA Pro Racing Trans-Am® Series returns for its 43rd season in 2010. Featuring ground-pounding, 800 horsepower, purpose-built Corvettes, Jaguars and Mustangs today, the series past champions include iconic road racing names like Mark Donohue, Parnelli Jones, Peter Gregg, Scott Pruett, Tommy Kendall and Paul Gentilozzi. Sanctioned by SCCA Pro Racing, the series plans a 10-race schedule in 2010. For more information, please visit www.sccatrans-am.com.