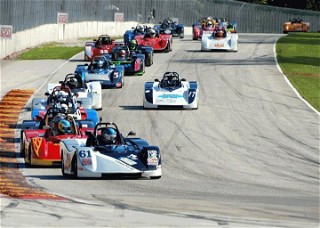 TOPEKA, Kan. (July 22, 2010)  Just two days after opening on July 20, the SCCA National Championship Runoffs entry list shows exactly 401 entries. That, coupled with an increase of 13 cars over 2009 regular season event averages, signifies that the pendulum may have shifted for the Club that felt the negative effects of the economy over the last two years.We have not completely rebounded, but were making progress back toward the levels of five years ago, SCCA President and CEO Jeff Dahnert said.Dahnert knows that registration procedural changes may have produced more of a land rush in Runoffs entries than previous years, providing the highest two-day entry total in the events history, but said the Club expects an overall increase in attendance for its crown jewel road racing event, held September 20-26 at Road America.Runoffs attendance hit an all-time high point in 2004, eclipsing 700, Dahnert said. It held steady for 2005 and 2006, but dropped off in 2007 and 2008. Last year, we saw nearly a 20 percent jump with the move to Road America and expect the number of racers to approach 650 this year.While more participants generally translates into more competition for racers and fans alike at the Runoffs, Dahnert is most pleased about the increase in entries during the 70-odd SafeRacer SCCA National Racing Series events during the regular season.Weve gone from averaging 125 cars to 138 cars from 2009 to 2010, which is a great increase and a sign that both the economy and participant satisfaction is on the rebound, Dahnert added. Were an organization based on participation weekend-to-weekend, not just at the year-end Championship events.Additionally, weve seen an increase in our Tire Rack National Solo program event attendance and our overall number of members. The increase in members is not substantial, but since the beginning of the year it is consistently headed in the right direction after 18-24 months of decline due to the economy.Dahnert said that while the improving economy is a factor in the rebound, the organization continues to look at its programs and to promote more opportunities for motorsports participation.Whether they are racing toward a Championship or just for fun, flagging, organizing or overseeing an event, SCCA exists to provide our members with the vehicle to create lasting experiences.For more information about SCCA, please visit www.scca.com.-30-