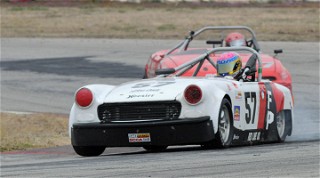 TOPEKA, Kan. (November 7, 2014) – The road course at Kansas Speedway was announced today as an addition to the Sports Car Club of America’s U.S. Majors Tour Mid-States calendar, leaving just one open hole remaining in the 2015 schedule. The doubleheader weekend will be June 20-21, 2015.

The 2.37-mile road course was opened in 2012 and incorporates an infield section and the progressive banking of the oval.

“The addition of Kansas Speedway to the 2015 Mid-States schedule is a welcome one in the build up to the SCCA National Championship Runoffs at Daytona,” Lisa Noble, SCCA President/CEO, said. “This event gives Mid-States drivers that plan to race for a National Championship at the end of the season an opportunity to run on high-speed banking within their home Conference.”

One additional event, anticipated to come from within the Southwest Division, will be added to the 2015 Mid-States schedule.