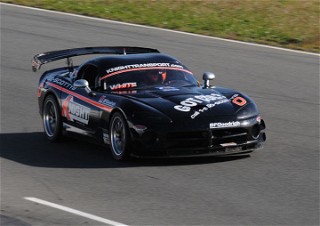 Willows, Calif. (April 12, 2015) – Thunderhill Raceway is located in the rolling foothills of Northern California’s coastal mountain range, overlooking the verdant farmland of the state’s Central Valley. At this time of year, temperatures are mild and cool breezes temper the California sunshine. This is the setting for Round 8 of the Western Conference Majors Tour. For the second day, a healthy field of 130 drivers distributed among seven race groups raced for mission-critical season points. Grid positions for today’s 16-lap races were established by fast lap times in yesterday’s 30-minute timed sprints.

After a set of early-morning warm-ups, racing began promptly at 9:00 AM. Race Group 3 is composed of GT1-2-3, Touring 1, and American Sedan, and the drivers took advantage of the cool morning air to make horsepower. Yesterday’s winning GT-1 driver Frank Emmett, of Penngrove, California, (No. 45 Red Line Oil Chevrolet Corvette) moved out smartly to lead from flag to flag, trailed by Kenneth Davis, of Escondido, California, (No. 64 Davis Stone.com Chevrolet Corvette) until lap six, when Davis slowed with mechanical trouble.

In GT-2, Erich Joiner, of Torrance, California, (No. 3 Tool of North America Porsche 997) kept his car ahead of contender Scotty B. White, of Auburn, Washington, (No. 0 GOT CDL?/Knight Transport LLC/BFGoodrich Dodge SRT10) Viper) most of the way to the checker, but White pulled ahead on lap 14 to take the win. The two tore up the track in the most exciting race of the group.

“We had a great battle with Erich,” White said. “It was a lot of fun and a clean race. With a couple laps to go he was starting to get a little bit loose, but the BFGoodrich tires I have just get better at the end of the race, and the Hawk brakes are so good. I couldn’t believe I was outbraking a Porsche GT3 in a Viper!”

Group 4 was all Spec Miata, and there were grudges to settle from yesterday’s sprint race. Among the top four drivers, anyone could take the victory. Mason Filippi, of Alamo, California, (No. 40 Cuttings Edge Drapery Mazda Miata) grabbed the lead in the first corner, but Steven Powers, of Mesa, Arizona (No. 145 Amerifirst Financial/miatacage.com/East Street Racing Mazda Miata) was right behind him. Marco Gallaher, of Santa Rosa, California, (No. 8 First Community Bank/PFR/Rossini Racing Products Mazda Miata) and Tommy McCarthy, of Mountain View, California, (No. 23 Du-All Safety Mazda Miata) tucked into the lead draft, as well.

Multiple light body contacts were reported, and leaders changed every lap in the early part of the race, but in the end it was Gallaher who claimed the lead on lap five and began pulling away to repeat his previous victory with a margin of 9.28 seconds over second place Filippi. Powers completed the podium in third position.

In Race Group 5, Joe Huffaker, of Petaluma, California, (No. 77 Huffaker Horsepower MG Midget) had mechanical issues on Saturday, but came back today to set a new lap record and earn the win in F Production, with a 5.8-second margin of victory over yesterday’s winner Jess Heitman, of Portland, Oregon, (No. 47 Maz-Toy Auto Recycling/Jesse Prather Motorsports Mazda Miata). In E Production, Anthony Jimerson, of Benicia, California, (No. 28 A.T. Mechanical/Jesse Prather Motorsports/Hoosier Mazda RX-7) completed his weekend with a second win.

Group 6 saw a repeat victory for past champion Mike Miserendino, of Bakersfield, California, (No. 11 MBI Racing Spec Racer Ford 3). Miserendino clearly has the new third generation SRF fully sorted out. Before the race, past national champion John Black, of Olympic Valley, California, (No. 17 CSR Performance Spec Racer Ford 3) said, “I don’t think I have anything for Mike. He’s going to walk away.”

Black’s assessment proved prophetic, as he finished in second position, with Todd Harris, of Portland, Oregon, (No. 24 Pro Drive Racing/Flat Out Racing Spec Racer Ford 3) claiming the third step on the podium after a clean close race.

“It was definitely hooked up,” Miserendino siad. “We spent a lot of time working on the car in the off-season, and the guys at MBI did a great job putting all our Gen Threes together. I just drive it.”

After the lunch break, the Group 7 race, Formula F again showed a close race with Denny Renfrow, of Santa Clara, California, (No. 11 Wheely Open Racing Piper/Honda) and Scott Huffaker, of Menlo Park, California, (No. 99 Van Diemen) locked into an evenly-matched fight for the lead. Daniel Swanbeck, of San Jose, California, (No. 27 BigWheels.net/SmugMug/TwoSeven Designs Piper/Honda) and Alex Kirby, of Long Beach, California, (No. 81 Fast Forward Racing Components Piper/Honda) followed and made it a four-car lead pack. For a time it looked as though Renfrow would have it all his way, but on Lap 14 Huffaker took the lead and held it to the checker. Renfrow settled for his second runner-up finish of the weekend, and Swanbeck took third place.

In the Formula Vee class, Dennis Andrade, of Buckeye, Arizona, (No. 87 D&D Racing Vortech) and Skip Streets, of San Clemente, California, (No. 51 Hoosier/Ron Chuck Engineering /My Bride Traci Mysterian) also repeated their battle, but this time the pair traded the lead back and forth throughout the race. Ron Wake, of Lafayette, California, (No. 41 Ron Chuck Engineering Mysterian) put himself in a solid third place and waited for the leaders to make a mistake. Streets led almost every lap, but on the final run to the checker, Andrade popped out of the draft and beat the other two cars to the line. Streets finished second and Wake in third. Joe Rozelle, of Modesto, California, (No. 70 Novacar F500) took the uncontested win in F500.

The afternoon remained cool and breezy as Group 1 took over the course. Tom Wickersham (No. 01 Maine Straight Racing, Competiton Autowerks, BF Goodrich Ford Mustang) had the pole position in Touring 3, but appeared to have mechanical difficulties at the start, pulling off and rejoining the field at the rear. Outside polesitter Scotty B. White (No. 0 BFGoodrich Tires/GOT CDL?/Knight Transport LLC Ford Mustang) took over the overall and T3 lead but had his own troubles and fell back as well. That left Lansing Stout, of Corvallis, Oregon, (No. 54 NISMO/UpRev Engine Mgmt/OR Powder Coat/Korvis LLC Nissan 350Z) and Kevin Fandozzi, of St. Joseph, Michigan, (No. 37 Hoosier/Moton/Insight Driven Chevrolet Cobalt SS) to battle for the T3 lead. But White wasn’t done yet, and worked his way back to the class lead by the eighth lap, holding that position to the finish. Fandozzi finished in second place and Stout third.

Formula B was the fastest group of open-wheel cars, with Gary Hickman, of Santee, California, (No. 76 Edge Engineering Inc. Phoenix) leading the class in third position overall. A mid-race caution allowed the field to bunch up, but Hickman pulled away again on the Lap 10 restart. Second place in FB went to John LaBrie, of Draper, Utah, (No. 33 Bug and Weed Mart Phoenix Race Works F1K12) and third position was claimed by Larry Vollum, of Portland, Oregon, (No. 5 Compview Medical Stohr).

Rounds Nine and 10 of the Western Conference Majors Tour will be held May 1-3, at Buttonwillow Raceway Park, in Buttonwillow, Calif.

Complete race results and further information is available at SCCA.com/ThunderhillMajors.