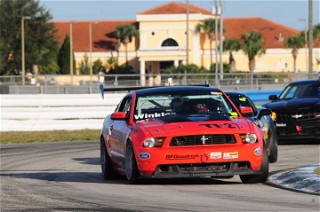 TOPEKA, Kan. (May 22, 2015) – The first set of Conference Champions have been crowned as the SCCA U.S. Majors Tour Southeastern Conference title run came to a triumphant conclusion May 2-3 at Summit Point Motorsports Park. The new two-conference structure on the East Coast opened the door for many new faces to claim a season-long Championship.

A total of 17 drivers were crowned Majors Champions for the first time in their career. With the high rate of participation on the East Coast, Majors Officials entered 2015 by splitting the former Eastern Conference into two entities – the Southeastern and Northeastern Conferences, increasing the number of races in a part of the country that has already embraced the Majors program in a big way.

Four drivers sealed their Championship season by claiming the title at Summit Point Motorsports Park, a dual-Conference event that counted as the final two rounds of the Southeastern Conference schedule. Mac Korince (B-Spec), of Rideway, Ontario, Canada; Alex Mayer, of Harleysville, Pennsylvania; George Winkler, of Frederick, Maryland, and Michael Scornavacchi (Touring 4), of Matthews, North Carolina, each notched finishes both days that allowed them to jump ahead of the one-time class leaders.

Winkler not only took home the Touring 1 Championship in the final race weekend of the season, but also took home a free entry to the 2015 SCCA National Championship Runoffs Presented by Garmin VIRB. The Championship was Winkler’s second, having scored his first in 2013. Before winning the drawing, Winkler said he had made no plans to attend this year’s edition of the Runoffs. Now, his plans may include a trip to Daytona in October.

In the Formula 1000 fight, Mayer and Michael Crowe finished the 12-race calendar tied at 134 points. However, Mayer got the edge in the Championship on the strength of his four wins. Crowe only scored three wins on the season, which gave the nod to Mayer for his third consecutive Championship.

Formula Enterprises featured another close-fought battle in the drivers’ standings. When all was said and done, Thomas Green, of Lake Mary, Florida, claimed the title with a scant four-marker margin over Ryan Norman. The win gave Green his first Majors Championship title.

Laura Hayes, of Fletcher, North Carolina, emerged as the Southeastern Conference Formula Vee Champion in season-long battle for the top spot. Throughout the season, the class featured races that were often decided by less than one second. While close racing put a premium on consistent performances, Hayes scored eight top-fives in 10 races. Those finishes propelled her to her first class title.

Michael Flynn, of Eustis, Florida, clinched the Super Touring Under class title in the span of three weekends, which included a pair of wins at NOLA Motorsports Park. Flynn clinched the title with a 14-point margin over Charlie Lowrance, for his first ever Majors Championship.

Ken Kannard, of East Troy, Wisconsin, was dominating in capturing the F Production title. Kannard racked up seven wins in 10 races, which allowed him to take the top position in the standings with an 89-point margin over Mark Weber. This is Kannard’s second Conference Championship title, having won before in 2014.

Jacek Mucha, of Highland Beach, Florida, was also successful in his quest for a Conference Championship. Mucha cruised to a 71-point margin of victory over Gianpaolo Ciancimino. The 2015 Championship is Mucha’s third consecutive title. Sherman Chao, of Palm Beach, Florida, finished the season as the Prototype 2 class champion.

Full point totals of for the 2015 Southeastern Conference U.S. Majors Tour Championships can be found here. For further information on the Majors program, visit SCCA.com/Majors.