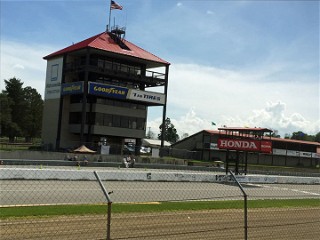 A majority of the day’s sessions were run under overcast conditions. While many of the clouds did not look to hold much threatening moisture, a very dark cloud arrived within the vicinity of the 15-turn, 2.4-mile circuit by 2:30 p.m. (EDT). Just 30 minutes later, a hard shower or rain, lasting five minutes, fell forcing many of the drivers in group three to pit lane. Because of that, the checkered flag flew early on the small-bore formula class. However, the sun made an appearance right after the shower, returning the track to a dry status.

Come Saturday, the first order of business will be to complete qualifying for the three remaining race groups – the production, big-bore and wings ‘n things groups. Directly after those three sessions, we move into eight 30-minute sprint races, beginning at 9:30 a.m. (EDT). Sunday will spotlight a full day of racing action with eight 19-lap feature races, beginning at 8:30 a.m. (EDT).

Follow along with us, on Saturday and Sunday, by visiting SCCA.com/SCCALive. There you will find a link to live scoring, a PA feed and live streaming video from around the famous Ohio race course. Additional information, including an entry list, track records and a weekend schedule, can be found at SCCA.com/MidOhioMajors.