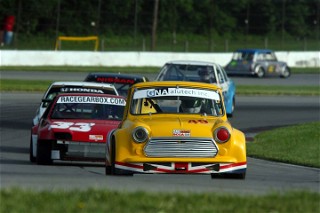 LEXINGTON, Ohio (May 31, 2015) – Racers at the Mid-Ohio Sports Car Course for the SCCA U.S. Majors Tour awoke to fog and wet conditions as the results of heavy overnight rain. The track started out wet and slippery for the first group who took to the track for Round Six of the Northeastern Conference and Round Four of the Northern Conference title chase.

As the Spec Racer Fords of Group One lapped the 15-turn, 2.9-mile circuit, the track began to dry in many places. That allowed drivers in later groups to turn up the wick a bit, except when short showers fell during part of each of the first three races.

Here is how things went down, according to Sunday’s winners: