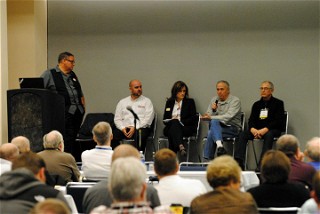 CHARLOTTE, N.C. (Feb. 21, 2015) – In staying with the SCCA Convention’s forward-looking theme, Saturday’s docket comprised of a series of panel discussions focused on specific areas of competition. Sessions were held for the Solo, Club Racing, Time Trials and RallyCross communities at the Charlotte Convention Center, on Saturday.

The subject of SCCA Solo competition was the first item on the list. VP of Rally/Solo and Special Programs Howard Duncan started the discussion with an overview of where the program has been a in the past and the overhead view of the future direction. Eric Prill, SCCA COO, moderated the deliberation that included Duncan, Steve Hudson (Past Solo Events Board Chair), Brian Connors (Current SEB Chair), Raleigh and Velma Boreen (Regional Solo Development).

“Test-n-Tune events seem to be on the rise, especially at the regional level,” Raleigh said. “With these types of low-key events, the focus is more on fun rather than competition. There isn’t the pressure knowing all I have is four runs to get it right. That allows for a more social aspect among the participants.”

The Club Racing program was the next to take center stage. Like Duncan, Prill broke down the past and future direction of the program. When the discussion portion opened, Greg Creamer posed questions to the panelists, which included Prill, Deanna Flanagan (Senior Manager, Club Racing), Jim Wheeler (Club Racing Board Chair) and David Arken (CRB member).

Many of the topics were future-focused with as it pertains to rules, future events – such as the yearly movement of the National Championship Runoffs – and the social aspect surrounding each race event. A renewed focus on camaraderie at Club Racing events was the hot-button topic.

“As evidenced by the Runoffs at Mazda Raceway, the social aspect of our events has fallen flat over the past 10 to 20 years,” Flanagan said. “We do the on-track stuff very well, but engaging an increasing number of people is important. The Runoffs held at Road Atlanta and Mid-Ohio were before my time, but I’ve heard the stories that many of you have lived. The overall goal is to increase the fun factor.”

Technology was another issue touched on by each of the four panelists. Flanagan highlighted the importance of the technological integration in the participant-facing applications, with enhanced registration on the forefront. Prill also teased a more interactive aspect of the Club’s website, which will be rolled out later in the year, in addition to a new potential corporate partnership with a major consumer electronics company.

Wheeler and Arken addressed issues pertaining to technology as it relates to technical rules and regulations. The topic centered mostly on the collection of data and its usage in governing performance characteristics within each class of racing.

The Time Trials session was led by Heyward Wagner with a panel that included SCCA Board of Director members Brian McCarthy and Tere Pulliam. Discussion centered on bringing more participants into the Club. The session participants agreed that getting potential participants the opportunity to sample what SCCA has to offer is the best way to convert those prospects into full members.

The day’s festivities will come to a close with the 2015 Awards and Hall of Fame Induction ceremony Presented by Mazda, scheduled to begin at 7:30 p.m. at the Grand Ballroom of the Hilton Charlotte Center City.

Additional information on the Convention and MSX Expo, including schedules, session descriptions and registration information, can be found at www.msxexpo.com.