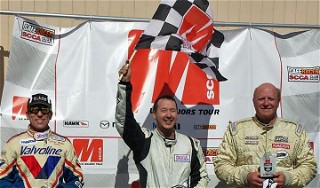 DESERT CENTER, Calif. (March 22, 2015) – Rounds Three and Four the SCCA U.S. Majors Tour Western Conference concluded at Chuckwalla Valley Raceway, this past weekend, with racing action on both Saturday and Sunday. This race marks the end point for the first third of the 12-round championship that will conclude in Portland, Oregon.

On Sunday, things started off with a morning warmup combining some groups. Following the warmup sessions, each of the seven race groups hit the track for their feature races.

As this was the first trip to the venue for the Majors Tour, which features some of the most talented amateur racecar drivers in the Western United States, new lap records were on the chopping block at the 17-turn, 2.68-mile circuit. A total of 13 lap records were reset over the two-day race weekend.

Here’s a summary of what happened both days:

Run Group One: Kenneth Davis, of Escondido, California, was the top qualifier in Touring 1. He put on a dominating performance, winning the class by more than 20 seconds, at the wheel of his No. 64 Davis Stone Inc. Chevrolet Corvette.

Russ Peterson, of Menlo Park, California, took the come-from-behind win in Touring 2. At the controls of his No. 7 Peninsula Equine Ford Shelby GT, Peterson clawed his way from a third-place starting position to take the win with a lap in hand over class rival Mitch Marvosh. Carl Young, of Salinas, California, also claimed victory in convincing fashion, in Super Touring Under, after not registering a lap in qualifying in his No. 49 Driving Ambition Honda S2000.

On Sunday, wide margins of victory were, again, the story of the day. Davis, Peterson, Paul Whiting (Super Touring Lite, No. 51 Next Victory Honda CRX), of Las Vegas, Nevada, and Derrick Ambrose (B-Spec, No. 71 CorkSport Mazda Performance Mazda2), of Vancouver, Washington, swept the weekend, in their respective classes.

Run Group Two: On Saturday, TJ Acker, of Saugus, California, cruised to victory in the 30-minute sprint race in his No. 62 MBI Racing Spec Racer Ford Gen3. Acker captured the win 9 seconds ahead of Mike Miserendino.

On Sunday, Miserendino, of Bakersfield, California, proved to be the fastest driver over the long haul by scoring the 20-lap feature race victory. Miserendino took the win by 13 seconds in his No. 11 MBI Racing Spec Racer Ford Gen3.

In the Spec Racer Ford class, Elliott Freireich, of Litchfield Park, Arizona, ran unopposed both days in his No. 15 West Valley View: The newspaper SRF.

Run Group Three: Tim Day, Jr., of Scottsdale, Arizona, came roaring back from a tough morning in qualifying, on Saturday, to notch an overall group victory in his Prototype 1-classed No. 81 TJR Motorsports Stohr WF1. Day qualified in the fifth overall position, but set sail during the race on what would end up as a 9.6 gap back to the second-fastest car.

Dan Erickson, of Chandler, Arizona, took home a narrow 0.692-second victory over Doug Nelson. Nelson was the better of the two drivers during the qualifying session, but Erickson drove his No. 6 Brawndo Formula Mazda to the eventual win.

During Sunday’s feature races, the each class winner put in a dominate performance, all finishing at least 50 seconds ahead of their closest in-class competition. Day was joined by Tom Hope (Formula Continental, No. 10 H&M Racing Dart Van Diemen ZTec), of Downey, California; John LaBrie (Formula 1000, No. 33 Bug and Weed Mart Phoenix Race Works F1K12), of Draper, Utah, and Ron Fletcher (Prototype 2, No. 19 Fletcher Team Inc. Radical SR3), of San Diego, as drivers who completed the sweep from the Wings ‘n Things group.

Run Group Four: Clement Lee, of San Diego, California, cruised to an atypically large margin of victory in Spec Miata, on Saturday. Lee qualified his No. 33 RM Autosports Mazda Miata in third, but did what he needed to do to lead the field to the line.

On Sunday, Steven Powers, of Mesa, Arizona, turned the tables on Lee. After finishing second to Lee the day before, Powers came home in first in his No. 145 Amerifirst Financial Mazda Miata. Lee finished the feature race in second.

Run Group Six: On Saturday, Robert Kahn, of Las Vegas, Nevada, started second in the GT-2 class, and third overall, bud didn’t stay in that position. By the time the checkered flag fell on the 16-lap big-bore race, Kahn had jumped two positions and drove to a dominating 10-second win in his No. 35 RK Racing Chevrolet Corvette.

Run Group Seven: On Saturday, Tim Harris, of Tustin, California, got the edge in a closely-contested Formula Vee battle. In his No. 20 Apex Fire Systems Mysterian M3, Harris beat class polesitter Skip Streets to the stripe by 0.099-second.

However, Streets got his revenge during Sunday’s 15-lap feature race. Streets, of San Clemente, California, drove his No. 51 Hoosier/Ron Chuck Engineering Mysterian FV M3 to a win in Formula Vee by 0.146-second over Harris

The next two rounds of the SCCA U.S. Majors Tour Western Conference Championship will be held at Thunderhill Raceway Park, April 11-12. Additional information, including full results, on the Chuckwalla Majors can be found at SCCA.com/ChuckwallaMajors.