Saturday from Hallett: In Their Own Words 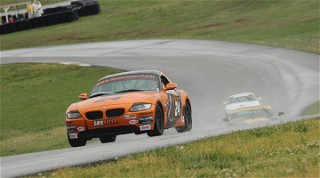 JENNINGS, Okla. (April 11, 2015) – Gambling on the precipitation during 25-minute timed races on Saturday at Hallett Motor Racing Circuit rewarded many SCCA Mid-States Conference drivers and caught others out throughout the afternoon.

The day started sunny, but by the third race of the afternoon had turned into an on and off rain that started up again just as a dry line began to form. That left tire choice and driving talent to decide the race winners in 26 Runoffs-eligible classes.

Matt Reynolds was the star of the day, lowering his existing track record in E Production on his way to a runaway win in the No. 71 Reynolds Bros. Racing Mazda Miata. Reynolds hopped out of the E Production machine and climbed immediately into front row of the Spec Miata race, which is where the fun really started.

Reynolds actually earned the lead on the opening lap before falling behind Jim Drago’s No. 2 East Street Racing Miata and Craig Berry’s No. 45 Berry Marble and Granite Miata, just before rain started to fall. With everyone on Hoosier Tires made for dry pavement, lap times immediately fell. Reynolds got around Berry and then Drago, climbing into the lead to win going away in the No. 74 Reynolds Bros. Racing Miata.

Michael Pettiford matched the feat with Touring 1 and Touring 2 wins in his class-configured No. 41 Go 4 It Racing Schools Chevrolet Corvettes.

Adding his name to the rain masters on a very difficult Hallett circuit was Alan Marshall. In a big bore group that included GT-1, GT-2, Touring 1 and American Sedan, Alan Marshall drove his No. 103 IHS Racing Mazda RX-7 to a GT-3 win, second overall to Mike McGinley’s GT-2 No. 50 Chevrolet Corvette, and turned the fastest lap of the race. Marshall was one of the few cars in the class running on rain tires, but the call was the correct one as the rain continued to fall. Each winner:

Jack Walbran, Formula 500, on his battle with David Vincent