Saturday Recap: Race One from VIR 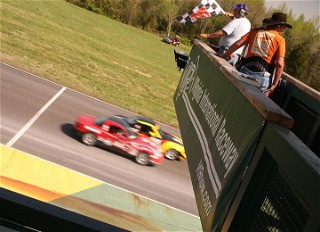 ALTON, Va. (April 18, 2014) – Day one of the SCCA U.S. Majors Tour at VIRginia International Raceway started the day under sunny skies. The race served as Round Nine for the Southeastern Conference and was the season-opening race for the Northeastern Conference.

Each of the eight race groups, made up of 28 Runoffs-eligible classes, took to the 3.27-mile, 17-turn circuit for a 25-minute sprit race.

Spec Miata led the day off in a big way. With oil-dry on the course near the finish line, the opening moments saw six cars make contact just after taking the green flag. Three of those cars were able to continue the race, while three were not. The rest of the race, restarted on lap five, proved to be just as intense with a multi-car battle for the lead that included eventual race winner Dillon Machavern.

Get reaction from each of the provisional winners here:

Additional information, including grids, a schedule and full entry list, on the VIR Majors can be found at SCCA.com/virmajors.