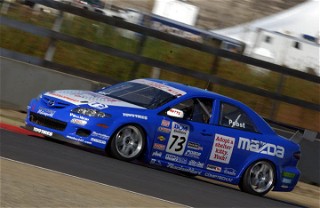 MONTEREY, Calif. (Oct. 20, 2007)  Randy Pobst, of Gainesville, Ga., edged Peter Cunningham, of Grafton, Wis., for the SCCA Pro Racing SPEED World Challenge Touring Car pole for Sundays Round 10 race at Mazda Raceway Laguna Seca and edged closer to his teammate for the Drivers Championship.Driving the No. 73 Mazdaspeed Motorsports Development MAZDA6, Pobst turned a 1:35.857 (84.050 mph) on his first flying lapnot a record, but 0.025-second faster than Cunninghams 1:35.882 (84.028 mph) in the No. 42 Acura Certified Pre-Owned/RealTime Racing Acura TSX. It was Pobsts third SPEED Touring Car pole of the season, and pulled him within 14 points of Championship leader, teammate Jeff Altenburg, going into Sundays finale.I think that Mazda Raceway Laguna Seca is a MAZDA6 track, Pobst said. You might recall this is the track where the MAZDA6 won its first race with Jeff Altenburg a couple years ago. But, the SCCA officials adjusted our car for the last several races and it worked. It slowed us down and the car didnt handle as well anymore. Weve been trying to figure that out and look for a way to compensate. I know that Craig Nagler and the Tri-Point team were in the shop all week working on the cars and what they did obviously worked. I want to specifically thank Chris Degioanni my car chief, because he predicted the track, he figured it out.Im really pleased to get pole while Mazda is associated with the Humane Society of the United States. Im carrying Mooch the cat on my car from the MUTTS comic strip. We visited the SPCA across the street yesterday and they named a cat after me and a dog after Jeff. I think the spirit of Mooch was probably with me.For Cunningham, the winningest driver in series history, it was his best qualifying effort of the year.Ian Baas, of Noblesville, Ind., will start third after setting a fast time of 1:36.081 (83.854 mph) in his No. 18 STASIS/Team Janica/Livermore Audi A4. Pierre Kleinubing, of Coconut Creek, Fla., ran more laps than anyone in the session (11) and will start fourth based on his lap of 1:36.093 (83.843 mph) in the No. 1 Acura Certified Pre-Owned/RealTime Racing Acura TSX. Kleinubing is winless in 2007, and if he does not win on Sunday, it will be his first winless season since joining the Championship in 1997.Brandon Davis, of Denver, Colo., made it three Acura Certified Pre-Owned/RealTime Racing Acura TSXs in the top five with a fast lap of 1:36.253 (83.704 mph).Kuno Wittmer (Acura RSX), Chip Herr (Audi A4), Altenburg (MAZDA6), Nick Esayian (Acura TSX) and Seth Thomas (BMW 325i).Altenburg needs to finish fourth or better to clinch his first Drivers Championship, regardless of what the competition does. Mazda clinched the Manufacturers Championship Presented by RACER at the most recent round at Road Atlanta.Sundays race makes its standing start at 12 noon (Pacific). Tune in to world-challenge.com to follow live timing and race notes via the SCCA Pit Board. Sundays race will be broadcast Saturday, Oct. 28 at 3 p.m. (Eastern) on SPEED.-30-