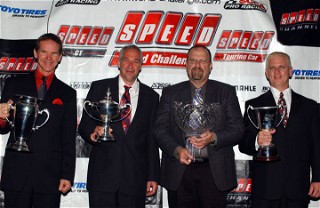 MONTEREY, Calif. (October 24, 2007)  The latest SCCA Pro Racing SPEED World Challenge Champions were honored at the year-end banquet in Monterey, Calif., following the season finale races at Mazda Raceway Laguna Seca.Jeff Altenburg, of Ellicott City, Md., collected his first World Challenge Championship in 2007 thanks to an impeccable record. Running with MAZDASPEED Motorsports Development MAZDA6, he kicked off the season with back-to-back wins from pole, collected a third pole at Mid-Ohio and finished every race in the top 10. Altenburg ended the year with 277 points and a total purse of $91,450.Randy Pobst, of Gainesville, Ga., earned his second SCCA SPEED GT Championship, his first being in 2003 with Audi. This time around, at the wheel of a K-PAX Racing LLC/Jim Haughey/3R Porsche GT-3, Pobst earned three poles, two wins and finished outside the top ten only once. It all adds up to 303 points and $75,900 for Pobst.Mazda earned its first SCCA SPEED World Challenge Touring Car Manufacturers Championship Presented by RACER magazine with the combined efforts of the Tri-Point Motorsports and Tindol Motorsports teams. Mazdas seven poles, 92 laps led and five race wins allowed them to clinch the title a round early at Road Atlanta and end the season 18 points ahead of Acura.It was SCCA SPEED World Challenge GT Manufacturers Championship Presented by RACER Magazine number two for Cadillac, who sealed the deal with a win from Andy Pilgrim in the final race. With three poles, 48 laps led and three race victories, Cadillac pulled out 11 points over Porsche for its second title in four years of competition.Coming into the game with a steep learning curve, Stan Wilson, of Mount Juliet, Tenn., and the Sorted Performance team stepped up to the challenge of fielding the series only Dodge SRT-4 entries on a budget that was limited to say the least. Just as the team thought theyd made a breakthrough at Watkins Glen, putting three cars in the top 10, their transporter was stolen and everything, including the race cars, were gone in an instant. Wilson soldiered on, borrowing Robb Hollands SRT-4 and continued to put in solid performances, which earned him the SCCA SPEED World Challenge Touring Car Piloti Rookie of the Year.Wilson also collected the SCCA SPEED Touring Car Sunoco Hard Charger of the Year Award for advancing 57 positions in his No. 92 Sorted Performance Dodge SRT-4 over the course of 2007. The SCCA SPEED World Challenge GT Piloti Rookie of the Year contest was extremely close coming into the season finale and it got even closer when the checkered flag fell. Finishing just three spots away from each other, Brian Kubinski, of Plainfield, Ill., and Jeffrey Robbins, of Southfield, Mich., were tied at 92 points apiece in the drivers championship. In such a scenario, the Rookie of the Year Award goes to whichever driver had the highest finishing position of the year. Kubinskis best finish of fifth at Mosport, versus Robbins best finish of ninth at Lowes Motor Speedway, earned the driver of the No. 12 Diamond Construction/Blackdog Racing Chevrolet Corvette the crown.Robbins did win the Sunoco Hard Charger of the Year award in SCCA SPEED GT completion. Robbins advanced 61 positions throughout the year in his No. 6 RSIG Security Dodge Viper.Had sponsor dollars not kept the No. 29 Tecmark Autosport/GMG/BMW 325Ci parked in Ohio during the final round of the SCCA SPEED Touring Car Championship, James Sofronas, of Newport Beach, Calif., might have equaled his best-ever World Challenge points finish. Sofronas still walked away with a trophy however, the Toyo Tires Cup, created this year for those drivers who have primary occupations other than race car driver. With a bevy of top-10s, including runner-up finishes at Lime Rock Park and Watkins Glen, Sofronas scored 205 points, the most of all Toyo Tires Cup drivers in SCCA SPEED Touring Car.The SCCA SPEED GT Toyo Tires Cup went to Rob Foster, of Phoenix, Ariz., who ended the season tenth in points. Foster narrowly missed a podium at Lowes Motor Speedway where he finished fourth in the No. 17 LTI Contracting/Foster Motorsports/Grp4Mt Dodge Viper. Foster switched to a Chevrolet Corvette at Mid-Ohio and only one race later had the car qualified in the top ten at Mosport. Foster ended the season with 136 points.Nathan Bonneau, Team Manager of RealTime Racing, was awarded the Zimmerman Cup, given to the World Challenge crew chief who demonstrates dedication, leadership and sportsmanship, as well as a genuine passion for the series. All of these qualities were possessed by the late Jerome Zimmermann, former RealTime crew chief, for whom the trophy is named.In recognition of the challenging year the series has faced and the hard work and comradery of all the teams in SCCA SPEED World Challenge, SCCA Pro Racing President & CEO Bob Wildberger presented the entire paddock with the Jim Cook Memorial Trophy. Traditionally the award is given to a person or entrant who has made significant contributions to the success of the series.Voted on by the teams of SCCA SPEED World Challenge, the Crew of the Year Awards went to Tri-Point Motorsports and 3-R Racing.Holly Connell, of 3-R Racing, was also recognized for her selfless work throughout the paddock, most notably her assistance in getting all the teams across the Canadian border twice with their papers in order.The SCCA SPEED World Challenge finales from Mazda Raceway Laguna Seca will air Sunday, October 28th, at 3 and 4 p.m. (EDT) on SPEED.Stay tuned to www.world-challenge.com for a 2008 schedule announcement.