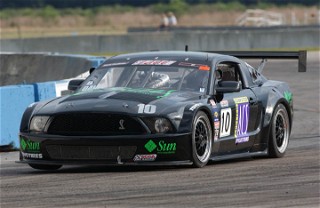 SEBRING, Fla. (March 12, 2008)  After his father Mike led the morning practice session, Brandon Davis, of Huntington Beach, Calif., topped the evening SCCA Pro Racing SPEED World Challenge GT Championship practice and was quickest on the day in preparation for this weekends season opening Round, part of the 56th Annual Mobil 1 12 Hours of Sebring Presented by Fresh From Florida. Defending Series Champion Randy Pobst, of Gainesville, Ga., and Michael McCann, of Canton, Ohio, completed the top three on the day.Driving the No. 10 ACS/Sun Microsystems Ford Mustang Cobra, Brandon Davis turned the fastest time, a 2:10.382 (102.161 mph), around the famed 3.7-mile Sebring International Raceway circuit. Davis moves to the GT Championship after spending the last several seasons in SCCA SPEED Touring Car, where he recorded a win in 2006.I like this car because its just a cool car, Davis said. If I was a kid, Id have pictures of this thing up in my room. I miss being on the big team with my friends, but on the flip side, I get to race with my dad now, which is pretty awesome.The way that I went out with those sticker tires, I should have been way ahead. The fact that we werent that much ahead of some of the other cars, Im not sure that even if I hit all my marks like on that lap, if it will be good enough for the pole tomorrow.Pobst, driving a brand-new K-PAX Racing Porsche 911 GT3 donning the No. 1 on the side as the reigning Champion, turned his best time in the afternoon session with a 2:10.712 (101.903 mph). McCann also turned his best time of the day in the later session, with a 2:10.852 (101.794 mph) in the No. 16 Remington Shaving/Cadillac Cadillac CTS-V.McCanns Cadillac teammate Andy Pilgrim, of Boca Raton, Fla., was fourth in the No. 8 entry with a 2:10.957 (101.712 mph), just a tick faster than Mike Davis morning time of 2:10.958 (101.712 mph) in the No. 11 ACS/Sun Microsystems Ford Mustang Cobra.Jeff Altenburg (Dodge Viper), Michael Galati (Porsche 911 GT3), Eric Curran (Chevrolet Corvette), Ritch Marziale (Dodge Viper) and Jason Daskalos (Dodge Viper) completed the top ten.Qualifying for Fridays race is scheduled for 11:50 a.m. Thursday morning. To follow all of the action via the SCCA Pit Board with live notes and timing, visit www.world-challenge.com.