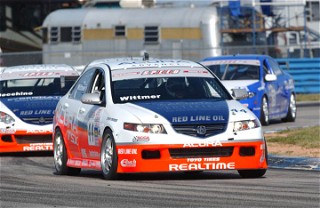 SEBRING, Fla. (March 12, 2008)  Canadian Kuno Wittmers morning practice time at Sebring held throughout the afternoon session as the fastest practice time of the day for Round One of the SCCA Pro Racing SPEED World Challenge Touring Car Championship, part of the 56th Annual Mobil 1 12 Hours of Sebring. Seth Thomas, of Cumming, Ga., and Peter Cunningham, of Grafton, Wis., completed the top three.The 2:21.823 (93.919 mph) entered by Wittmer, of Montreal, Quebec, in the morning session could not be topped in afternoon practice despite the attempts of Wittmers RealTime teammates and BimmerWorlds Thomas and James Clay. Wittmers No. 44 Acura Certified Pre-Owned/RealTime Racing Acura TSX was the only car able to break the 2:22 mark all day.The car is really working great, Wittmer said. Hats off to RealTime for putting the car together properly. Its all thanks to them and Acura really. Im very grateful to be in World Challenge again and with RealTime.Theres definitely some characteristics Id like to have from the RSX on the TSX, but the gearbox is sweet and its the latest technology from Acura. The TSX definitely responds to the bumps better. The RSX is more twitchy - its a two-door versus a four-door. There are some tracks where the RSX will be faster than the TSX as we saw last year, but I think the TSX is the way to go.Despite topping the second practice session, Thomas was unable to match Wittmers morning time and ended the day second-fastest. Driving the No. 38 BimmerWorld BMW 325i, Thomas fastest time was still his morning session time, a 2:22.333 (93.583 mph).Cunninghams morning time, a 2:22.508 (93.468 mph), remained the third quickest time of the day. The No. 42 Acura Certified Pre-Owned Acura TSX pilot was followed on the timing sheets by teammate Pierre Kleinubing in the No. 43 Acura Certified Pre-Owned Acura TSX, who entered a 2:22.546 (93.443 mph).Thomas teammate and BimmerWorld owner James Clay, of Blacksburg, Va., was fifth-fastest in morning practice. Clay turned a time of 2:22.885 (93.221 mph) in the No. 36 BimmerWorld BMW 325i.Charles Espenalub (MAZDA6), Chip Herr (MAZDA6), Nick Esyian (BMW 325i), Jason Martinelli (BMW 325Ci) and Michael Galati (MAZDA6) completed the top ten in Sebring practice.Qualifying for Round One of the SCCA Pro Racing SPEED World Challenge Touring Car Championship is set for 11:25 a.m. (EDT). News, live timing and lap notes are available at www.world-challenge.com