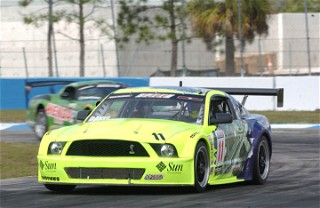 SEBRING, Fla. (March 12, 2008)  Mike Davis, of Huntington Beach, Calif., surprised the paddock by topping morning practice for the opening round of the SCCA Pro Racing SPEED World Challenge GT Championship, part of the 56th Annual Mobil 1 12 Hours of Sebring Presented by Fresh From Florida. Defending Champion Randy Pobst, of Gainesville, Ga., was second-fastest, followed by Mike Davis son, Brandon Davis, of Denver, Colo.Driving the No. 11 ACS/Sun Microsystems Ford Mustang Cobra, Davis entered a time of 2:10.958 (101.712 mph) around the 17-turn, 3.7-mile road course. In five starts behind the wheel of the Mustang Cobra, Davis previous best finish is a 14th at Long Beach and the former Trans-Am driver didnt expect to see himself at the top of the time sheets this morning in Sebring.Im really surprised because everybody in practice was running a second and a half faster than I was, Davis said. I was running pretty close to the same times today, but everybody else is running slower, so Im wondering how that could happen.While Davis remained modest about how his performance stacks up against the rest of the SPEED GT field, he admitted beating out his own son Brandon was a welcomed way to start the season.That felt pretty good. He was kind of surprised at that, but Ive got a lot of time in different cars here. Its kind of like Denver. We went out in the Saleen and were P1 right off the bat, but then the rest of the field caught us up. I think its [the Ford Mustang Cobra] a good package, Davis added. The reliability is where Im concerned. We think weve got the bugs fixed, but we dont know yet.Defending SPEED GT Champion Pobst was second-fastest in the session. Driving the No. 1 K-PAX Racing Porsche 911 GT3, Pobst entered a time of 2:11.011 (101.670 mph).The younger Davis, Brandon, turned a 2:11.524 (101.274 mph) in the No. 10 ACS/Sun Microsystems Ford Mustang Cobra to end the session in third.Now entering his second season in SPEED GT, Jason Daskalos, of Albuquerque, N.M., was fourth-quickest in the session. The No. 05 Daskalos Developments & Investments Dodge Viper pilot turned a 2:11.915 (100.974 mph).James Sofronas, of Newport Beach, Calif., completed the top five in his No. 14 Global Motorsports Group Porsche 911 GT3. Sofronas stopped the clocks with a 2:11.961 (100.939 mph).Tomy Drissi (Chevrolet Corvette), Andy Pilgrim (Cadillac CTS-V), last years race winner Eric Curran (Chevrolet Corvette), Brian Kubinski (Chevrolet Corvette) and Tommy Archer (Dodge Viper) completed the top ten.The second SPEED GT practice session of the day will take place at 5:15 p.m. (EDT). Event news, living timing and lap notes are available at www.world-challenge.com