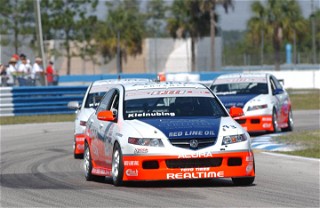 SEBRING, Fla. (March 14, 2008)  Pierre Kleinubing, of Coconut Creek, Fla., led the entire way to capture his 27th-career SCCA Pro Racing SPEED World Challenge Touring Car win, his third at Sebring International Raceway, to start the 2008 season at the Mobil 1 12 Hours of Sebring Presented by Fresh From Florida weekend. Teammates Kuno Wittmer, of Montreal, Quebec, and Peter Cunningham, of Milwaukee, Wis., completed the podium.Starting from his record 31st pole, Kleinubing led the field away from the standing start under sunny skies in his No. 43 Acura/RealTime/Eibach/Red Line Acura TSX. While his gap to second place never eclipsed two seconds, Kleinubing was never seriously challenged for the lead in the 18-lap, 66.6-mile race that went caution free. He averaged 92.963 mph in beating Wittmer to the checkered flag by 0.645-second.It feels awesome, Kleinubing said. Im so glad to be here with a RealTime sweep.I think I had the same pace as these guys [Cunningham and Wittmer], but they were fighting a little bit. They actually caught up to me for a little bit, but then I think Kuno made a mistake in Turn 17 and then on the same lap into Turn One, so I opened up that gap again and maintained it. The new tires [Toyo R888] stayed consistent throughout the race. I was able to run the last lap and the first lap at the same pace.After recording his the first winless season of his career in 2007, Kleinubing is high hopes for the new season.Im very optimistic. This team is really tight. We know that until we get to Road Atlanta, nothings been decided and well just keep doing our jobs, one race at a time.Wittmer started second in his No. 44 Acura/RealTime/Eibach/Red Line Acura TSX and withstood attempts by teammate Peter Cunninghams No. 42 Acura to hold onto secondequaling his career-best finish.The start was great, Wittmer said. I was concerned about the BMW in fourth place [Nick Esayian]. The first thing I did on the start was look in the mirror and he didnt get a very good start, so that cleared my mind right away. Pierre set a really good pace and I tried following him. Peter was definitely putting the pressure on me, but hes my teammate, so I knew he wouldnt do anything stupid. After halfway, he did initiate a really good pass on me. I saw he had a better line out of 16 and he went to the inside and I went to the outside and I was able to stick it, but he definitely kept the pressure on. The last lap was a concern, but when I saw him drop two wheels I was able to breathe.Cunningham completed the second-straight RealTime Racing podium sweep (dating back to the 2007 finale), but had to fend off challenges from Charles Espenlaubs No. 73 Mazdaspeed/Stoptech/Racinghart MAZDA6, while putting the pressure on teammate Wittmer for the runner-up spot.Id been trying to really ramp it up there in the last couple of laps, Cunningham said. Id had better opportunities and actually passed him [Wittmer] under braking into Turn 17, but then he had a better run coming out. On the last lap, I thought Id get a good run coming out of 16 like I had before, but I got two wheels off and that didnt give me the run I was looking for, so I wasnt going to just stick it in and take both of us out. I just wanted him to know I was there.Espenlaub, of Lutz, Fla., was the highest finishing Mazda in fourth after starting sixth. Defending Series Champion Jeff Altenburg completed the top five after starting eighth in his No. 1 Mazdaspeed/Stoptech/Racinghart MAZDA6.Seth Thomas started from the back of the pack after his No. 38 BimmerWorld BMW 325i failed post-qualifying inspection, but battled back to a sixth-place finish despite a couple of trips off course. He also set the races fast lap with a 2:22.018 (93.791 mph). Jason Martinelli (BMW 325Ci), Dino Crescentini (Acura TSX), rookie Jason Saini (MAZDA6) and James Clay (BMW 325i) completed the top 10.Clay, who started 15th, captured two awards for his runthe Racing Electronics Holeshot Award for advancing six positions on the opening lap in his No. 36 BimmerWorld BMW 325i and the Sunoco Hard Charger Award for advancing five positions throughout the race.The series next travels to VIRginia International Raceway, in Alton, Va., for Round Two, April 25-27. Todays race will be broadcast on SPEED Channel Friday, March 21 at 12 noon (EDT). For more news, results and photos visit www.world-challenge.com.-30-