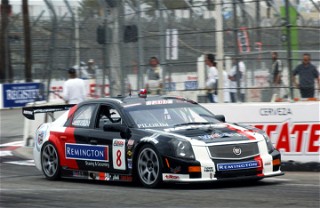 LONG BEACH, Calif. (April 19, 2008)  Andy Pilgrim, of Boca Raton, Fla., improved on his Friday practice time to lead Saturdays second round of practice for Sundays SCCA Pro Racing Long Beach SPEED GT Presented by Applied Computer Solutions race. Local ace Mike Davis, of Huntington Beach, Calif., was second on the combined practice results, followed by last years race winner Eric Curran, of East Hampton, Mass.After topping Friday evenings practice session, Pilgrim improved his time to a 1:26.150 (82.238 mph) in this mornings 30-minute session, which ran free of yellow flags. While Pilgrim was happy to lead both practice sessions in his No. 8 Remington Shaving Cadillac CTS-V, he felt the team had some work to do to ensure a successful qualifying effort at the 1.968-mile temporary street course.The car felt a little bit better [than yesterday], Pilgrim said. It had the same traits, the same oversteer exit, but I think everybody has that to a degree. Im surprised nobodys going any quicker. Were struggling though. I was behind a couple of the quicker guys and I was faster, but I couldnt get by them. Ive got nothing on the straightaways, so I cant even get in a position to draft up behind them. Qualifying is really important here, because the cars are so closely matched, speed wise, that you just cant pass anybody. They either have to make a mistake or let you by. Thats how it is on a street course. You cant force it or youll end up in the wall.Driving the No. 11 ACS/Sun Microsystems Ford Mustang Cobra, Mike Davis put a smile on the faces of the hometown crowd by posting the second fastest time in practice, a 1:26.321 (82.075 mph). Defending Long Beach race winner Eric Curran slotted his No. 30 Whelen Motorsports Chevrolet Corvette into the third spot on the time sheets, stopping the clocks with a 1:26.394 (82.005 mph).Brandon Davis, of Huntington Beach, Calif., was fourth with a lap of 1:26.511 (81.894 mph) in the No. 11 ACS/Sun Microsystems Ford Mustang Cobra. Reigning SCCA SPEED GT Champion Randy Pobst completed the top five, turning a 1:26.645 (81.768 mph) in the No. 1 K-PAX Racing Porsche 911 GT3.Pobsts teammate Michael Galati (Porsche 911 GT3) was sixth, followed by Californians Dino Crescentini (Porsche 911 GT3) and James Sofronas (Porsche 911 GT3).Dodge Viper pilots Ritch Marziale and Jason Daskalos completed the top ten.Qualifying for the Long Beach SPEED GT Presented by Applied Computer Solutions will take place tomorrow at 8:30 a.m. (PDT). The race will launch for a standing start at 4 p.m. (PDT), following the Champ Car race. It will air Wednesday, April 30, at noon (EDT), 9 a.m. (PDT) on SPEED. Full results, live timing and lap notes are available at www.world-challenge.com.