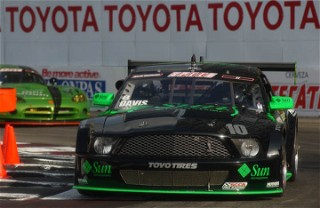 LONG BEACH, Calif. (April 20, 2008)  Brandon Davis, of Huntington Beach, Calif., will start from pole in front of his family and friends for the SCCA Pro Racing Long Beach SPEED GT Presented by Applied Computer Solutions race this afternoon. Reigning SCCA SPEED GT Champion Randy Pobst, of Gainesville, Ga., will start second.Piloting the No. 10 ACS/Sun Microsystems Ford Mustang Cobra, the 22 year-old will start from pole for the second consecutive-race. At Sebring he inherited the top grid spot based on practice times when qualifying was cancelled. Today in Long Beach, Davis earned the pole outright, circulating the 1.968-mile temporary street circuit in 1:25.479 (82.883 mph).We know that the tires are better on the first lap than any other lap, Davis said. I just went out and had the switch on coming out of the last corner to focus and hit all my marks perfectly. I feel that I did that. We made some changes to the car between practice and qualifying and I like that a lot. It was just hooked up.Shortly after turning his pole lap, the red flag came out for the No. 17 LTI Contracting/Foster Motorsports Chevrolet Corvette of Rob Foster who was stopped on the front straight with a broken differential, but Davis elected to remain in pit lane when the course went back to green. The course would go red one additional time to allow Dino Crescentinis No. 4 Centric Parts/Shoptech Porsche 911 to be pushed out of Turn Two.I came in after that lap and knew I couldnt go any faster so I got out and watched. I have to say, I was really sweating it for the rest of the session. I was pacing up and down pit lane but it held up.The difference between running a practice lap and a qualifying lap here is you have to just hold the gas down and trust that the car is going to hook up coming out of corners. You slide it really close to the walls for that one lap. You have to take that chance and hold your breath for a minute and 25 seconds.The pole is extra sweet for B.Davis who grew up with the Long Beach Grand Prix in his backyard.Its pretty awesome to be a pole winner at Long Beach. Ive been coming here since I was a kid and grew up not far from here, originally from Huntington Beach. To win a pole at Long Beach is pretty special.Mirroring the front row from Round One at Sebring, Davis will share the front row with point leader Pobst. The No. 1 K-PAX Racing Porsche 911 GT3 driver entered at time of 1:25.591 (82.775 mph). The fasted driver in practice this weekend at Long Beach, Andy Pilgrim, of Boca Raton, Fla., will start third in his No. 8 Remington Shaving Cadillac CTS-V after turning a 1:25.625 (82.742 mph).Michael Galati, of Olmstead, Ohio, will start fourth in the No. 23 K-PAX Racing Porsche 911 GT3 with a lap of 1:25.631 (82.736 mph).Earning his career-best grid position, Ritch Marziale, of Tempe, Ariz., will start the race fifth in his No. 56 All-Cut Concrete Cutting Dodge Viper after turning a 1:25.846 (82.529 mph).Newport Beach resident James Sofronas (Porsche 911 GT3) will start sixth and Davis father Mike Davis (Ford Mustang Cobra) will start seventh. Jason Daskalos (Dodge Viper), Dino Crescentini (Porsche 911 GT3) and Michael McCann (Cadillac CTS-V) completed the top ten.Defending race winner Eric Curran will start shotgun on the field in his No. 30 Whelen Motorsports Chevrolet Corvette after the car failed to start for the session.Round Two of the SCCA SPEED World Challenge GT Championship will begin with its signature standing start at 4:00 p.m. (PDT) today on the streets of Long Beach. Live timing and lap notes are available at www.world-challenge.com. The race will air on SPEED, Wednesday, April 30 at noon (EDT), 9 a.m. (PDT).