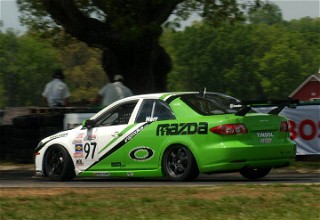 ALTON, Va. (April 25, 2008)  Chip Herr, of Lititz, Pa., will start Saturdays SCCA Pro Racing SPEED Touring Car Round Two race from pole at VIRginia International Raceway during the Bosch Engineering 250 weekend after setting a new qualifying lap record. Charles Espenlaub, of Lutz, Fla., will start second, making it an all-Mazda front row.Driving the No. 97 Tindol Motorsports MAZDA6, Herr captured his third career-pole with a new qualifying lap record at VIRginia International Raceway. Herrs lap of 2:05.650 (93.859 mph) around the 17-turn, 3.27-mile track was slower than several of the times clocked in morning practice, but was the quickest lap produced in the much warmer qualifying session .Although not as warm as Herr and the Tindol Motorsport team were expecting.We actually expected it to be warmerit wasnt as warm this afternoon as yesterday, Herr said. With the four new tires, the car actually hooked up better than I expected. Its really my second weekend in the car with the MAZDA6 and the Tindol crew has really worked with me to help get the car to suit my driving style, as opposed to me changing my style to suit the car. Tindol Motorsports has been very open minded to the changes I want to make and as you can see, its working.The key to the race is going to be keeping the tires underneath me. The BMWs are going to be strong and theyve done some long runs to see how the tires hold up. I have not done a 50-minute run. Our cars tend to tighten up over a run and Im trying to change that.Espenlaub put his No. 73 Mazdaspeed/Stoptech/Racinghart MAZDA6 on the front row with Herr after clocking a 2:05.696 (93.654 mph). The pair have shared the front row before, at Road America in 2006, but Herr doesnt expect to have the same launch that won him that race.Were here to run for a manufacturers championship. I have great company up front with Charles [Espenlaub] alongside. Weve shared the front row before, but that was when I had a better launch [in an all-wheel-drive Audi]. Well have to get a good start and, hopefully, keep those Acuras behind us and hope for a Mazda one-two finish.Canadian Kuno Wittmer will start Fridays race third on the grid. Wittmer entered a 2:05.709 (93.644 mph) in the No. 44 Acura/RealTime/Eibach/Red Line Acura TSX. He is followed by teammates Peter Cunningham, of Milwaukee, Wis., and Pierre Kleinubing, of Coconut Creek, Fla. Cunninghams No. 42 Acura/RealTime/Eibach/Red Line Acura TSX turned a 2:05.780 (93.562 mph), while Kleinubing, whose practice time was actually faster than the pole time, turned a 2:05.800 (93.577 mph) in the No. 43 Acura/RealTime/Eibach/Red Line Acura TSX. The top five are separated by only 0.150-second.Blacksburg, Va. driver James Clay will have a challenge ahead of him if he hopes to win in front of the hometown crowd; he starts sixth on the grid. Clays teammate Seth Thomas (BMW 325i) will start seventh.Defending SCCA SPEED Touring Car Champion Jeff Altenburg (MAZDA6) lines up eighth on the grid ahead of Payton Wilson in the lone Dodge SRT-4. SCCA SPEED GT driver Eric Curran completes the top 10 in an Acura TSX, making a return to his former team, RealTime Racing, for the weekend.Michael Galati, of Olmstead, Ohio, who topped the second practice session, was only able to complete one lap when his No. 95 Mazda North America/Tindol MAZDA6 had problems with its ignition system. The crew was unable to get the car re-fired before qualifying time expired.The SCCA Pro Racing SPEED World Challenge Touring Car race will launch from a standing start, Saturday at 4:10 p.m. (EDT). Results, photos, live timing and lap notes are all available at www.world-challenge.com.