Foss is Tops in MX-5 Practice at Road Atlanta 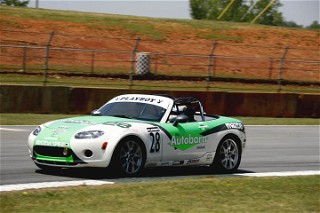 BRASELTON, Ga. (May 1, 2008)  Eric Foss, of Fort Worth, Texas, topped both practice sessions today for Round One of the SCCA Pro Racing Playboy Mazda MX-5 Cup, part of the Classic Motorsports Magazine Mitty Challenge at Road Atlanta. Robert Huffmaster, of Clarkston, Mich., was second fastest in practice, followed by Anders Hainer, of Woodland Hills, Mich.Polesitter at last years race, Foss topped both 30-minute practice sessions at Road Atlanta in his No. 28 Team MER/Autobarn Mazda MX-5. His fastest time came on the last lap of the morning session, a 1:40.433 (91.036 mph). In the warmer afternoon session, Foss best time around the 12-turn, 2.54-mile course was a 1:40.634 (91.037 mph).We had a mild under-steer this morning, Foss said. We did a couple things we thought were going to fix it, but with the track getting hotter, it just exaggerated the situation. Mid-session, I actually came in, because I thought it was hindering the performance of the car. We made the change and immediately I went out and the car was a lot better. Were still not 100 percent where we want to be. The track conditions are deteriorating a little bit, but the car is drivable in these conditions, so I think thats going to make it a good car for tomorrow and Saturday.After starting this race from pole last year, Foss endured a race-long battle with teammate Jason Saini, only to have both himself and his teammate fall victim to a last lap sneak attack by Ara Malkhassian. The third-place finish was Foss first and only MX-5 Cup race in 2007.Its hard not to be a little confident with the way the weekends been going and the way last year went. I think it will be a little tougher this year. Obviously my teammates are right there with me. Qualifying is important, especially if it rains [during the race] on Saturday. If we can get MER cars in the top four, thats what were shooting for, because everyone knows its all about working together with your teammates and hopefully we can do a better job of that this year during the race than last year.It appears things are going to plan then, as three Team MER cars follow Foss on the combine practice sheets. Huffmaster, the reigning SCCA Touring 3 National Champion also turned his fastest lap of the day in the morning session, entering a 1:40.805 (90.709 mph) at the wheel of his No. 27 Team MER/Huffmaster Co. Mazda MX-5. He is followed by the No. 13 Team MER/Under Armour Mazda MX-5 of Hainer, who entered a 1:40.838 (90.680 mph) in the morning session.Ryan Schmisk, of Austin, Texas, in the No. 81 Team MER/Airco Mechanical Mazda MX-5 improved on his morning time, but not his fourth position on the time sheets, by entering a 1:40.866 (90.656 mph) in the afternoon session.2007 SCCA Spec Miata National Champion and newest member of the Mazdapseed Driver Development Ladder, Brad Rampelberg, of San Jose, Calif., ended the day fifth on the timesheets. The No. 14 Hooverspeed Mazda MX-5 driver set his fastest time of the day, a 1:41.071 (90.471 mph) in the morning session.Brad McAllister, Brett Smrz, Neal Sapp, Mark Jenkins and Todd Buras completed the top ten.Qualifying for Round One of the SCCA Pro Racing Playboy Mazda MX-5 Cup will take place Friday, May 2, at 12:30 p.m. (EDT). The race will take place Saturday, May 3, at 1:30 p.m. (EDT). For results, photos, news, live timing and lap notes, visit www.mx-5cup.com.