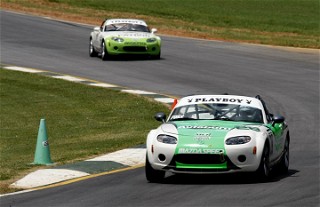 BRASELTON, Ga. (May 2, 2008)  MER teammates Eric Foss, of Fort Worth, Texas, and Ryan Schimsk, of Austin, Texas, proved just how close the competition is in SCCA Pro Racing Playboy Mazda MX-5 Cup when they entered identical fast laps in qualifying for Saturdays Round One race, part of the Classic Motorsports Magazine Mitty Challenge. Going back to each of the drivers second-fastest lap times, Foss was awarded his second-consecutive Road Atlanta pole.Driving the No. 28 Team MER/Autobarn Mazda/Brooks Co. MX-5, Foss entered a record-setting lap of 1:40.763 (90.747 mph) early in the 27-minute session. Satisfied with the time, Foss pulled the car into pit lane and watched his competitors inch closer to his pole time, ready to return to the car if necessary. Just before the checkered flag came out on the session, Schimsks No. 81 Team MER/Airco Mechanical MX-5 crossed the timing stripe and recorded the same exact lap time as Foss.I put my lap in pretty early, Foss said. It was a decent lap, but everyone was closing in, so I was getting a little worried. I was actually in pit lane when Ryan turned his lap and I was amazed that it was the same lap time. I was afraid that one of my teammates or someone else was going to take the pole away, so Im just ecstatic that weve got two guys on the front row.Per the SCCA Pro Racing rulebook, when drivers enter identical fast times in qualifying, the drivers second-fastest lap times are used to determine the polesitter. Foss next fastest lap of 1:41.235 just barely beat out Schimsk 1:41.266.Obviously were pretty equal in speed, but were going to take a look at the data, Foss continued. Already this weekend weve found that Ryan is two tenths quicker than me in some corners and Im a tenth or two quicker than him in others, so were trying to string the perfect driver together and adapt to each other. If we can do that and really continue to focus and work with each other, I think thats going to give us a great opportunity. The field is much tighter this year. I dont think theres going to be a breakaway. We can always hope that, but realistically I think anyone in the top 10 has a really good shot.Third on the grid for Saturdays race is Elivan Goulart, of Shelton, Conn., in the No. 70 GRE/Velocity-Club.com/Red Line Oil MX-5. Goulart clocked a 1:40.813 (90.702 mph) around the 12-turn, 2.54-mile road course.Todd Buras, of Melbourne, Fla., will start fourth in the No. 56 Hooverspeed/Pancreaticcure.org MX-5. Buras entered a time of 1:40.941 (90.587 mph). He is followed on the timing sheets by Mark Jenkins, of Fairview, Texas. Driving the No. 25 Team MER/Jenkins Bros./Traxxas MX-5, Jenkins ties his career-best qualifying effort of fifth, with a 1:41.022 (90.515 mph).Brad Rampelberg, Ara Malkhassian, Robert Huffmaster are sixth, seventh and eighth on the grid, respectively. All of the top-eight cars were under the previous qualifying lap record of 1:41.461 (90.123 mph) set by Foss last year. Brad McAllister and Deborah Loth complete the top ten.The first race of the 2008 SCCA Pro Racing Playboy Mazda MX-5 Cup season will take place at 1:30 p.m. (EDT) tomorrow, May 3. Go to www.mx-5cup.com for results, live timing and lap notes.