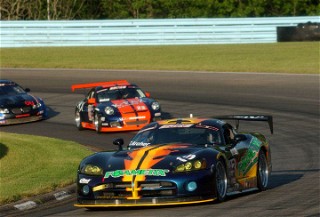 WATKINS GLEN, N.Y. (June 6, 2008)  Tommy Archer, of Duluth, Minn., was fastest Friday afternoon at Watkins Glen International and wound up fastest on the day in preparation for Sundays SCCA Pro Racing SPEED World Challenge GT Championship Round Four race, part of the Sahlens Six Hours of the Glen weekend. Andy Pilgrim, of Boca Raton, Fla., and Eric Curran, of East Hampton, Mass., completed the top three.Driving the No. 13 Foametix/Woodhouse Performance Dodge Viper, Archer recovered from a blown engine in Thursdays test session to turn the days fastest lap of 1:55.695 (105.587 mph). In Friday mornings session, Archer was at the other end of the time sheets in 22nd as the team continued to work out electrical issues with the new engine.In the first session we had an electrical glitch that was causing the engine to go into safe mode, so it just wouldnt go anywhere, Archer said. The Woodhouse crew worked hard all day, literally until an hour before the session, so they worked six hours to figure out what the problem was in this hot weather and give me a car that worked. My job is easy  I just drive it, but they did a heck of a job all day.It feels good to have a car thats close to the front now. We cant race that fast though. We tried a setup that was for qualifying and theres no way I can go that fast through the whole race, because after three laps I was sliding the tires. To be able to take a car through the Esses flat is very difficult, so thats what I work on when I come here. Its a fight with your foot every time you get to Turn Two, because your brain says lift, but you tell yourself no, I cant lift! But if you can get through there, its bad fast. I bet I come off the bridge five to 10 miles an hour quicker than most guys just because I can get up through there quick, so thats what I always work on.Pilgrim, who was fastest in the morning session, dropped another half second off his best time with a lap of 1:55.923 (105.587 mph) in the No. 8 Remington Shaving/Cadillac Cadillac CTS-V.Currans 1:56.848 (104.751 mph) came in the morning session. In the afternoon session, he was sixth fastest in the No. 30 Whelen Motorsports Chevrolet Corvette and had a brush with the guard rail in Turn Six. He continued on in the session.Point leader Brandon Davis was fourth fastest in the No. 10 ACS/Sun Microsystems Ford Mustang with a time of 1:57.138 (104.692 mph) in the morning. Michael Galati completed the top five in his No. 23 K-PAX Racing Porsche 911 GT3 with a fastest time of 1:57.138 (104.492 mph) in the afternoon session.Defending race winner Randy Pobst (Porsche 911 GT3), James Sofronas (Porsche 911 GT3), Michael McCann (Cadillac CTS-V), Joey Scarallo (Pontiac GTO) and Dino Crescentini (Porsche 911 GT3) completed the top 10 on the day.Qualifying for Sunday mornings race is scheduled for Saturday at 9:55 a.m. (EDT). Live timing and session notes are available via www.world-challenge.com through the SCCA Pit Board.