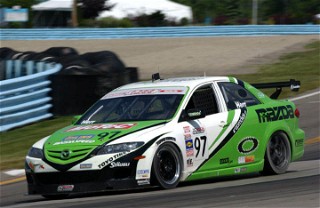 WATKINS GLEN, N.Y. (June 6, 2008)  Chip Herr, of Lititz, Pa., was quickest in the second practice session for Round Six of the SCCA Pro Racing SPEED World Challenge Championship, but couldnt top the morning time of Pierre Kleinubing, of Coconut Creek, Fla., who was fastest on the day at Watkins Glen International.With temperatures surpassing the 90 degree mark in this afternoons SCCA SPEED Touring Car practice session, Herrs No. 97 Mazdapseed/Tindol Motorsports MAZDA6 was unable to top Kleinubings morning time of 2:06.497 (96.761 mph).Despite being the fastest car of the day, the No. 42 Acura/RealTime/Eibach/Red Line Acura TSX driver still had some trepidations about the pace of the Acura versus the Mazda at Watkins Glen.Last year I thought we were going to do really well here, but we got smoked, Kleinubing said. Nothings changed really and I dont know what the Mazda guys are doing, but if they do what they did last year I dont think we have a chance.So far so good though. The car could be better, but well be working hard on it.I like Watkins Glen a lot, Kleinubing added. Its got lots of fast corners and sweeping corners, which I like a lot. Especially in these cars, its pretty fun. They can get pretty edgy in a loose situation, which is the way I like it to drive.Kleinubing was followed by his teammate, Peter Cunningham, of Milwaukee, Wis., in the combined practice times. Cunningham turned a 2:06.745 (96.249 mph) behind the wheel of the No. 42 Acura/RealTime/Eibach/Red Line Acura TSX in the morning session.Herrs lap of 2:07.483 (96.012 mph) was the fastest of the afternoon, but was slower than the Lime Rock Park winners morning time of 2:07.170 (96.249 mph) which put him third on the combined practice time sheet.The cars been really good, Herr said. Weve changed over from Moton shocks to Ohlins shocks. [Michael] Galati, myself and [Charlie] Putman have been working with the technicians to get the setup perfect. Weve run it in cool temperatures and now weve run it in extremely hot temperatures. We made a change and I went eight-tenths of a second quicker, so were making really good progress with the Ohlins suspension so far.When I ran here last year with the Audi we didnt have the top end horsepower, but the Mazdas seem to have a good balance. They seem to be right where the Acuras are. I struggled with the Audi last year, but this track seems to compliment the Mazdas as Randy Pobst showed last year (winning both SPEED Touring Car races). Tindol is trying to give me the best car they can this weekend to get the back-to-back win. I hope my teammate Galati and I can qualify together, because you need drafting to put a good lap together.Michael Galati, of Olmstead, Ohio, was fourth fastest in both the afternoon practice and in combined practice times. Driving the No. 95 Mazda North America/Tindol Motorsports MAZDA6, Galati turned his fastest time of 2:07.173 (96.246 mph) in the morning session.Rookie Jason Saini, of Fort Worth, Texas, also turned his fastest lap in the morning session. A lap of 2:07.310 (96.143 mph) put Sainis No. 74 Mazdaspeed/Stoptech/Racinghart MAZDA6 fifth fastest on the day.James Clay (BMW 325i), Kuno Wittmer (Acura TSX), Seth Thomas (BMW 325i), Dino Crescentini (Acura TSX) and Jim Daniels (MAZDA6) completed the top ten in combined practice times.Qualifying for Round Six of the SCCA Pro Racing SPEED Touring Car Championship is set for 8:00 a.m. (EDT) on Saturday, June 7. The 50-minute race will launch from a standing start at 8:35 a.m. (EDT) on Sunday, June 8. Live timing and lap notes are available at www.world-challenge.com.