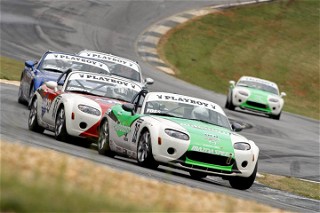 IRVINE, Calif. (July 9, 2008) - After months of hard work following the open wheel unification in February, which turned many support series schedules upside down, Mazda has announced the 2008 TV package for the SCCA Pro Racing Playboy Mazda MX-5 Cup. The series will have all eight races broadcast in an expanded 60-minute package by DIRECTV and DISH Network. All content will be produced by the Carolinas Production Group/Visioncast. Race fans from coast-to-coast with DIRECTV or DISH Network will find the races broadcast on Comcast Sports Net West (CSN West) and MASN (Mid Atlantic Sports Net), both a part of their sports paks. In addition to national coverage, the races will be broadcast regionally on Time Warner Sports Net, LoneStar Sports Net, Comcast 900 Sports, MavTV, AmericaOne Network, and AMGTV. Each race will have multiple broadcasts. Additional channels may be added as the season progresses. In just two years, the MX-5 Cup has established a reputation for great racing, extremely close action, with a minimum of yellow flag time, Mazda North American Operations Alternative Marketing Manager Jim Jordan said. To better showcase the races, and allow for more feature stories we have stepped up our TV package to a full one-hour program per race. Airtimes will vary by region but will reach over 53 million households when the first race airs this week. When we asked our racers, and our fans what they most wanted to see changed for 2008, the number one answer was show the complete race, and the 60 minute format will allow for that. We are also pleased to have new partners like Playboy and LifeLock joining Mazda and Kumho for the broadcasts. In what is believed to be a first for a professional series, the races will also be available online via a dedicated YouTube channel (www.youtube.com/MazdaMX5Cup). Each race will be available on demand.The broadcast team is led by veteran Rick Benjamin, with analysis provided by racer Elliott Forbes-Robinson, aka EFR. EFR is still very much hands-on and lapped with the MX-5 racers in a Road Atlanta practice session. Pit reporters will be a rotation of Derek Pernesiglio, Todd Lewis and Rod Albright. Joe Ligon and Tom Gee will produce the shows. All have extensive motorsports backgrounds and know their way around a racetrack. "I'm excited our company has the opportunity to take this outstanding motorsports series and add major elements of creativity and production value to its broadcast coverage, Carolina Group Prodcutions Benjamin said. We've been able to work with a terrific platform created by Mazda and its partners in the MX-5 Cup series and create coverage for this series that I think will help it become an even bigger factor in professional racing. We've been able to put together a network-level broadcast crew to cover the series, and I think fans and stakeholders in the championship will be pleased with what they'll see this season and beyond."I had never driven an MX-5 Miata before and was impressed with the brakes and handling of the car, when I took a few laps at Road Atlanta, Forbes-Robinson said. After watching the first race of the year at the Mitty weekend I could tell that the series has quite a few drivers that do a really good job of racing. The qualifying and the racing is very close and the drivers were not making crazy moves and raced well together. The race was fantastic and I am looking forward to working with Rick Benjamin on the rest of the races in 2008.Round One of the 2008 MX-5 Cup season at Road Atlanta recently aired on July 8th. Round Two from Mosport International Raceway is scheduled to air the week of July 21. Detailed broadcast schedules will be posted shortly to both www.mx-5cup.com and www.mazdaspeeddevelopment.com.About SCCA Pro Racing Playboy Mazda MX-5 Cup:Stepping up in place of the former MAZDASPEED Miata Cup, the SCCA Pro Racing Mazda MX-5 Cup made its debut in 2006. Featuring identical Mazda MX-5s on spec Kumho tires, MX-5 Cup gives drivers the opportunity to run on high-profile weekends in an economical, entry-level racing series. The 2008 MX-5 Cup schedule features eight races at prestigious events across North America, and with grids composed of roughly 30 cars at each race, MX-5 Cup has become one of the best shows in motorsports today. The season champion is awarded a factory supported Mazda ride in the series above. 2007 MX-5 Cup Champion Jason Saini is racing a MAZDA6 in the 2008 SCCA Pro Racing SPEED World Challenge Touring Car Championship.About Mazda:Mazda is the brand of choice for road-racers across North America. More than 9,000 grassroots racers compete in various classes with the Sports Car Club of America (SCCA) and the National Auto Sport Association (NASA). Racers who are years away from earning a drivers license can now begin their professional motorsports careers in the Mazda family. A driver can begin in karts and progress through the Skip Barber series, Club Racing Formula Mazda, professional Star Mazda and finally to Formula Atlantic, all with Mazda. No other car company has ever connected the dots this way. On any given weekend, there are more Mazdas on the road-race tracks of America than any other brand of vehicle. At the track, youll see MX-5 Miata, RX-8, MAZDA3, MAZDA6, RX-7 and other vintage Mazda models competing, because every Mazda has the Soul of a Sports Car. In fact, the largest road-racing class in the world is Spec Miata, with more than 1,500 first- and second-generation Miatas tearing up Americas racetracks, making it the most-raced production car in the world. Mazdas involvement in motorsports extends to its relationship with Mazda Raceway Laguna Seca, one of the worlds premier road-racing circuits, and the Skip Barber Schools for driving and racing. For more information on MAZDASPEED Motorsports Development, visit www.MAZDASPEEDDevelopment.com.