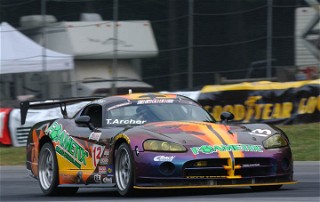 LEXINGTON, Ohio (July 19, 2008)  Tommy Archer, of Duluth, Minn., captured his second SCCA Pro Racing SPEED World Challenge GT pole of the season and will lead the field at the start of Sunday afternoons Mid-Ohio SPEED GT Presented by Remington race. Brandon Davis, of Huntington Beach, Calif., will start second.Driving the No. 13 Foametix/Woodhouse Performance Dodge Viper, Archer set a time of 1:25.673 (94.882 mph) on his first flying lap around the 2.258-mile track. It is Archers second top qualifying effort of the year, after winning from the pole position at Miller Motorsports Park in May. Following an engine failure at the previous round in Watkins Glen, Archers team has been working non-stop to get him back up to speed.The Woodhouse Performance team has worked really hard as well as the Dodge engineers to come up with the fix for what the issue was, Archer said. I think theyve got it worked out. The handling of the car is decent. John Mills, the new engineer, and I are having a blast doing this. Hes part time and Im part time, but when were [at the track], were full time trying to make it go fast. He hit on something yesterday afternoon that really felt good and we expanded on that and it went faster today. After setting the pole time, Archer continued to make changes to the car, anticipating what the track conditions might be for the race more than 24 hours after Saturday morning qualifying.You think about that kind of stuff all through the weekend, Archer said. When you make your setup changes, youre thinking ahead. You have to anticipate what might happen in the race. Thats why in the qualifying session, I made four stops. I was working hard to figure out what I wanted in the car for Sunday.Driving the No. 10 ACS/Sun Microsystems Ford Mustang Cobra, Davis appeared to be relegated to the second row until a late-session run resulted in a best lap of 1:26.055 (94.460 mph).Davis lap relegated Jeff Courtney to third in the No. 99 KENDA/JTM/MPI Coin/Badger Dodge Viper with a best time of 1:26.215 (94.285 mph). It is Courtneys career-best starting position, topping a seventh place effort in 2007. Courtneys best SPEED World Challenge finish (fourth) came at Mid-Ohio in the 2006 Touring Car race.Tommy Milner, of Leesburg, Va., continued the impressive return of Aston Martin to SPEED GT competition, qualifying fourth in the No. 21 Rahal Letterman Racing Aston Martin DB9 with a best time of 1:26.239 (94.259 mph). It was the best-ever qualifying effort for an Aston Martin car in series competition.Michael McCann, of North Canton, Ohio, put his No. 16 Remington Shaving Cadillac CTS-V fifth on the grid at his home track with a fastest lap of 1:26.768 (93.684 mph).Three-time Mid-Ohio winner Michael Galati (Porsche 911 GT3), point leader Randy Pobst (Porsche 911 GT3), Andy Pilgrim (Cadillac CTS-V), defending race winner Eric Curran (Chevrolet Corvette) and Ritch Marziale (Dodge Viper) completed the top 10.Sundays Mid-Ohio SPEED GT Presented by Remington is set to make its standing start after the IndyCar Series race, Sunday at 4 p.m. (EST). To follow live lap notes and timing and scoring, access the SCCA Pit Board at www.world-challenge.com. Sundays race is scheduled to air Thursday, July 24 at 1 p.m. (EST) on SPEED.