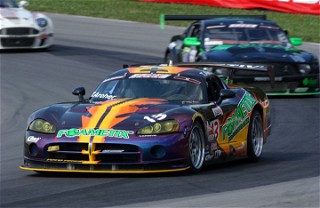 LEXINGTON, Ohio (July 20, 2008)  Tommy Archer, of Duluth, Minn., led every lap Sunday to win the Mid-Ohio Sports Car Course SPEED GT Presented by Remington race, Round Five of the SCCA Pro Racing SPEED World Challenge GT Championship. Brandon Davis, of Huntington Beach, Calif., and Andy Pilgrim, of Boca Raton, Fla., completed the top three.Starting from the pole in his No. 13 Foametix/Woodhouse Performance Dodge Viper, Archer got away cleanly from the standing start to lead second starting Davis No. 10 ACS/Sun Microsystems Ford Mustang Cobra. Davis was never far from Archer, but he was unable to mount a challenge for the lead despite the race being slowed by three cautions.Archer beat Davis by 1.224 seconds, averaging 77.075 mph over the 29-lap, 65.481-mile race.Its really rewarding for Foametix, the sponsor, who didnt get on the podium at Watkins Glen and the Woodhouse Performance team who are all working so hard, Archer said. Im a pretty picky guy. I wanted everything right on the car, because at this track, if you get behind somebody youre in trouble. I knew going into qualifying we had to get up front as far as possible to keep a clean track.While it was Archers second win of the season and Davis third podium, two new faces graced the top three throughout the race before falling back, allowing Pilgrim to remain perfect in 2008 podium appearances in his No. 8 Remington Shaving and Grooming Cadillac CTS-V. Third starting Jeff Courtney ran third in his No. 99 KENDA/JTM/MPI Coin/Badger Dodge Viper before a lap-six spin put him well back to an eventual 15th place finish.Courtneys spin promoted hard charging Tommy Milner to third in his first series appearance in the No. 21 Rahal Letterman Racing Aston Martin DB9. Milner set the races fastest lap of 1:28.072 (92.297 mph) as he reeled in the lead duo. For over 15 laps, the top three were nose-to-tail until Milner dropped a wheel and spun out of contention in the Carousel on lap 22.Milners departure coincided with Archer pulling out a slight advantage over Davis, one that would never shrink en route to the 2004 Champions ninth series win.The Viper hasnt been the hottest car the last couple of years, so if feels good to put the car up front and be racing with these guys again, Archer added. For Davis, Mid-Ohio was a race to get back into the points chase after a mechanical failure eliminated him from the most recent race at Watkins Glen.We pushed and pushed, but were never able to get close enough to Tommy, Davis said. I think the second restart was the only time we really had a shot at it. We ran a great race flag-to-flag and when youre racing at this level with guys like Andy and Tommy, they dont make mistakes, so its good to come away with second, especially after our troubles at Watkins Glen. Hopefully well get ourselves back in the Championship.At a track that has never been kind to the Cadillac CTS-V, with no wins in five tries, Pilgrim was pleased with his third place finish.Its a surprise to be here thats for sure, Pilgrim said. I qualified eighth and I wanted to qualify in the top 10, so I was happy with that, but I didnt know what today would bring. Michael [McCann] had a bad start and I got by him. Randy [Pobst] went off in the Keyhole, so I got by Randy. A little bit later Jeff Courtney went off course and I got by Jeff. Then [Tommy] Milner went of track and I got by Milner. I had a little bit of a battle with Michael Galati, so I passed one car and ended up in third. There must be something on the front of the car that people see and they just drive off the road.The Remington guys are here and we just took a picture on the podium with all of them so Im really happy to be here. Its always good to make your sponsor smile.Milner fell to sixth after his spin, but worked back to fourth after an exchange with Michael McCanns No. 16 Remington Shaving and Grooming Cadillac CTS-V and Michael Galatis K-PAX Racing Porsche 911 GT3 reminiscent of great Trans-Am battles from the past. The trio went three-wide into Madness on lap 27, with all three cars emerging in a different order with only minor battle scars on the other side.Galati completed the top five, with teammate and point leader Randy Pobst finishing sixth after running as low as 11th in his K-PAX Racing Porsche 911 GT3.Dino Crescentini (Porsche 911 GT3) advanced seven positions from 14th to finish seventh, one better than teammate James Sofronas (No. 14 Global Motorsports Group Porsche 911 GT3), who advanced 21 positions to take the Sunoco Hard Charger honor. Sofronas also advanced 12 positions on the opening lap to earn the Racing Electronics Holeshot Award after failing to post a qualifying time due to a water pump failure on Saturday.Fifth-starting McCann recovered from a poor start to reach the top five with three laps to go, but faded to ninth. Tony Gaples (Chevrolet Corvette) completed the top 10.Pilgrim cut into Pobsts point lead, and now trails at the seasons mid point by 13 (503 to 490). Davis remains third, with 455, followed by Galati (404) and Sofronas (352).Despite its fifth-place finish, Porsche maintained the lead in the SCCA SPEED GT Manufacturers Championship Presented by RACER Magazine. The German manufacturer has 31 points to Cadillacs 29, Fords 28 and Dodges 23.Todays race will be broadcast Thursday, July 24 at 1 p.m. (EDT) on SPEED. The series next travels to Elkhart Lake for the Road America SPEED GT Presented by Remington Aug. 8 - 10. To learn more visit www.world-challenge.com.