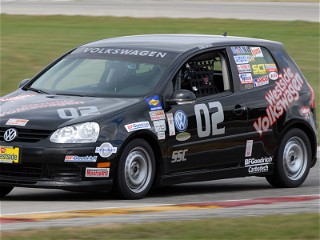 TOPEKA, Kan. (June 28, 2012) – Sports Car Club of America contingency sponsors paid members more than $2.6 million in cash and product for competition in 2011, with that number expected to march past $3 million in payouts to Club Racing, Solo, ProSolo and RallyCross competitors during the 2012 season.

The money for contingency prizes comes directly from outside partners who reward competitors for using their products or fulfilling the company requirements during competition. Some companies, like Volkswagen of America, pay cash for top finishes, while others, including BFGoodrich Tires, pay rewards in the form of product.

Volkswagen, for example, pays up to $1,000 for winning a race in a Volkswagen at a BFGoodrich Tires Super Tour Club Race and up to $550 for a win in a Tire Rack SCCA Solo National Tour event. BFGoodrich Tires offers up to four tires for a Club Racing win, and two tires for a Solo victory at the same events.

These payouts directly help competitors to offset the cost of racing SCCA’s most prestigious amateur racing programs, which do not receive purses or prize money.

“When you consider that our members are competing for pride and not prize money, the support they get from our contingency sponsors can be a big part of their racing budget,” said Jeff Dahnert, SCCA President/CEO. “We are all very appreciative of that support.”

When you total cash and product value from 2011, contingency partners paid out $1,156,000 during SafeRacer National Series races, and an additional $435,500 just during the SCCA National Championship Runoffs. With an approximate 7,500 Nationally-licensed drivers, that averages $212 per racer.

In a positive trend for the SCCA members who receive the benefits, the amount of money pledged has increased by 20% during 2012.

“The numbers shown here only include the programs arranged through SCCA’s National Headquarters that are nation-wide in scope,” Dahnert said. “In addition to these programs, Regions and groups of racers have also put together a number of contingencies for their own local events and Championships through local sponsors, making the actual payouts even larger.”

In the past two years, 54 companies have participated in at least one of the SCCA’s programs by offering contingency prizes to members.

The amount of money available to top finishers in the SCCA programs is staggering. The cash and product payouts come from an available pool of $19,400,000 pledged during the 2011 season, which increases to a potential $23,318,000 in 2012.

In the course of the contingency program, the SCCA administers payouts on some programs, while in other cases, the company itself directly pays the competitors. The payouts administered by the SCCA were used to estimate the total value of all paid programs.

About SCCA: Founded in 1944, Sports Car Club of America, Inc. is a 42,000-member motorsports organization that incorporates all facets of autocross, rally and road racing at both club and professional levels. It annually sanctions over 2,000 events through its 115 regions and professional subsidiary. Landmark events and series for the Club include the SafeRacer SCCA National Racing Series, which includes the BFGoodrich Tires SCCA Super Tour; the Club Racing National Championship Runoffs® at Road America; and The Tire Rack® SCCA Solo National Championships and ProSolo Championship at Lincoln, Neb. For more information, please visit www.scca.com.