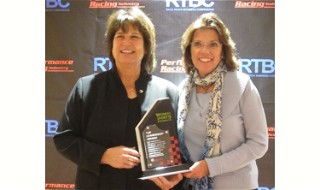 Leadership is described and demonstrated in so many ways,” St. James said. “Lisa's character, charisma, and commitment to support cultural change without disrupting the core values of sports car racing is powerful. She is the perfect person to receive this year's award.”

“It is an honor to be recognized by the Women’s Sports Foundation with their Project Podium Award,” Noble said. “As leaders in motorsport, it is our responsibility to encourage and mentor the next generation of competitors, to set the bar for them to achieve their best and to meet their personal goals. Project Podium offers that opportunity for growth through their scholarships.

“The award was especially meaningful to me as it was presented by one of the most ground-breaking drivers in the sport, Lyn St. James, and because it is a part of Paul Newman’s legacy. Mr. Newman was a hero of mine as well as an SCCA legend and that ties the award back to our wonderful Club, making it something of which we can all be proud.”

Josten's has graciously provided the beautiful trophy presented each year.

About Lyn St. James Lyn's (www.lynstjames.com) passion, focus and determination made her a fierce competitor on the track where she achieved many firsts in racing. That same passion has made her an advocate for the next generation of racers and an incredible motivational speaker. As former President of the Women's Sports Foundation, she was able to establish the Women's Sport Foundation Project Podium Scholarship for women in racing and the Leadership Award to recognize outstanding leadership in the racing industry.

About Race Track Business Conference The annual Race Track Business Conference (www.racetrackbusinessconference.com) hosted by the National Speedway Directory provides a platform for industry leaders to collaborate, analyze, and conceptualize around the business of motorsports. Shared insights from all forms of racing creates dialogue and interaction in a unique intellectual environment.

SCCA Founded in 1944, Sports Car Club of America, Inc. is a 40,000-member motorsports organization that incorporates all facets of autocross, rally and road racing at both club and professional levels. It annually sanctions over 2,000 events through its 115 regions and professional subsidiary. Landmark events and series for the Club include the SafeRacer SCCA National Racing Series, which includes the BFGoodrich Tires SCCA Super Tour and the U.S. Majors Tour; the Club Racing National Championship Runoffs® at Road America; and The Tire Rack® SCCA Solo National Championships and ProSolo Championship at Lincoln, Neb. For more information, please visit www.scca.com, like SCCA on Facebook at facebook.com/sccaofficial, or follow the club on Twitter @SCCAOfficial.