Course workers to be eliminated.

The ProSolo Reset team has been working hard to bring back a fan favorite. In 1982, for two events ProSolo used tennis balls on top of the cones to determine penalties. The tennis balls acted as penalty alerts. If a tennis ball came off the cone it alerted the sleepy course workers a cone was hit and they could be sure which car should be penalized. The initial trial lasted two events. The first attempt was problematic as the round balls tended to roll a great distance from the cone. In the second attempt, the event organizers used tethers to keep the balls from getting too far away. This too presented challenges as the tether had to be fed down the hole on top of the cone and was difficult to reset quickly. The idea was abandoned after two events until now!

The ProSolo Reset team has the solution. “There have been technological advances in both tennis balls and cones since 1982.” says reset team member Myke Dziengel. Dziengel, hard at work in his barn with his 16 ducks, had the idea while the ProSolo trailer wintered at his Ohio estate. The idea was born during a morning duck egg collection. “Eureka!” shouted Dziengel. "Tennis eggs! They won’t roll as far as tennis balls. They will sit securely in the cone tops." Dziengel headed off to his 3D printer to design a Tennis Egg with automatic retraction so it will reset automatically.

While the SCCA waits for patent status we can only say we have the solution. No one has to work course again! 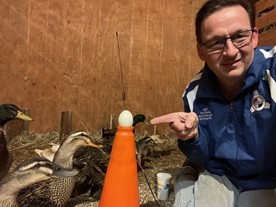