The PS Reset team went into Toledo with updates that were designed to correct the issues that occurred in Bristol. As discussed in the Bristol Recap the software was not correctly handling the data coming in from the timing system.

The changes were prepared in advance and tested on the backup timing system during the Practice Starts on Friday. This included a software change and hardware change that allowed the computers to better handle the serial data that comes from our timing systems. Practice starts ran for over three hours without incident. The main advantage of this configuration is the administrative programs run without delay. Printing reports and changes to the event file happen quickly as opposed to 15 seconds or more depending on the report or type of change.

We elevated the backup system to Primary for Saturday morning expecting it to perform as it did on Friday Practice starts. We encountered an issue with the Virtual comm ports disconnecting and reconnecting at the beginning of competition.  The primary system missed a few “pairs of runs,” but the backup system did capture the time. It took approximately 30 minutes for the cause to be determined.  A brand-new USB cable was faulty and would drop the connection intermittently. Once we replaced the cable the system ran without error for the rest of competition.

We experienced a few timing errors over the rest of regular competition.

At the beginning of Challenge competition, we discovered the ET was not reflecting the time delay created by the light offset at the tree. It was difficult to detect in testing. We attempted to rearrange the system reverting to a prior known configuration. This was not successful. The solution was to correct the math error in the current version of the software, and we successfully ran the challenges with approximately a 60-minute delay.

During the week we investigated the right side missed trips at Toledo. During Oscoda practice starts we encountered some missed trips and other odd behavior from the trip heads. We opened each emitter and tuned the lens to produce a sharper beam. (See pics)

We also discovered the timing heads have a large “working area” and a small “sweet spot”. We laser aligned the emitters and receivers for Oscoda and there were no missed trips during regular competition.

We did encounter a missed trip during Challenge runs. We ruled out the battery as the issue. We suspect the sensor in the receiver has a diminished range of sensitivity and will test it in the laboratory for verification.

We encountered an emitter that stopped working that caused a 5 min delay.

We did have some trips that were missed by one system but registered on the other; we continue to investigate the root cause.

The working area for a 30 ft distance between Emitter and Receiver is approximately 30”. 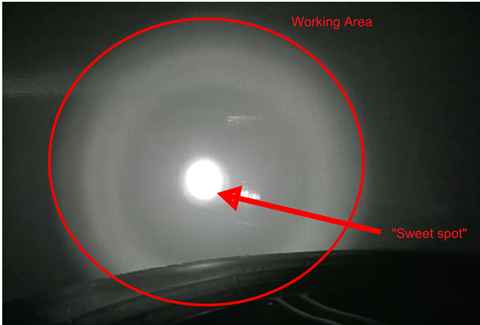