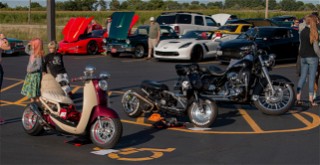 Window Tint on a Racecar?

Let's face it, some like their performance cars raw, some like them with a healthy dose of seasonings and side dishes. And sometimes a machine's recipe evolves from one style to the other.

That was certainly the case with one of ex-racer Carroll Shelby's most famous cars. For 1965, he began production of hopped-up Mustangs at his shop in California. For those first couple years, his 'Stangs, called GT-350s, were barely-disguised competition tools.

With a road-racing suspension setup, high-strung small-block V8, and lack of a backseat on which to haul buddies, those original GT-350s weren't a popular pick with the burger-joint crowd. And that was fine with Ford, at least at first -- Shelby's cooperation on the Mustang was initially sought to give competition credibility to Ford's pioneering ponycar, which GT-350s did handily by winning sports-car races.

But starting with the '67 model year, Ford began expecting Shelby's machines to speak to a more mainstream performance crowd -- the typical muscle-car buyer. Signaling this shift toward street appeal over race-track prowess were mandatory power steering and power brakes, along with a number of optional comfort and convenience features, including air conditioning, tilt steering wheel, and tinted glass.

And, perhaps most importantly, a backseat was now standard.

But despite the added weight of such amenities, Shelby's machines hadn't lost their bite. Although the base GT-350's V8 was now somewhat tamer, that model for '67 was joined by the new GT- 500, powered by a torquey 428-cid big-block V8 rated at 360 hp.

For '68, the GT-500 packed an even bigger wallop, with the midyear introduction of the GT-500KR "King of the Road," which had a 428 that was some 40 hp stouter yet. Also that year, the Shelby Mustang's fastback bodystyle was joined by a convertible, to further appeal to the boulevard cruising set.

Development and production of Shelbys continued along similar lines into the next generation of Mustangs, ending in 1970.

Today, muscle-car fans are divided on which of the Shelby Mustangs are the greatest -- the almost race-ready early versions, or the punchier, plusher, more street-appropriate later ones. Regardless, any flavor of Shelby Mustang is counted among the great performance cars, a fact clearly reflected in the hefty prices these cars command nowadays.