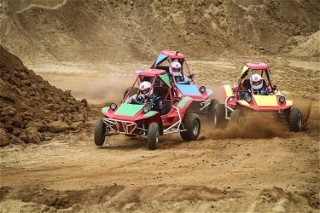 I was born into an SCCA family. I’m a third-generation member and racer. My grandfather and grandmother were involved for many years as members of the South Jersey Region. I was one month old when I attended my first SCCA race. My father (J.D. King) was racing and we have some funny pictures of me in the RV getting bottle fed. My grandfather, grandmother and mother all had competition licenses, as well. Since then, I’ve been involved in Club Racing, Solo, and Road Rally. I’ve volunteered since 2007, helping my father with chairman activities, timing and scoring and working at Road Rally checkpoints. For fun, I raced Gran Turismo at my home. This is where I learned all the fundamentals of driving a car before actually applying those skills in real life.

In 2012, when I was 15, I took an SCCA racing school in my father’s Formula Ford at the Lightning Circuit at New Jersey Motorsports Park. It was a two-day school, so I got my Novice Permit in one weekend. Before the school, my only experience was in a rental kart and racing around my grandmother’s farm in a golf cart. My first day at the racing school, I spun out a few times and stripped third gear. It was bad in a way, but good in another. I knew what it felt like for a car to spin and how it felt when it began to rotate. I also learned that I needed to blip the downshifts and be smoother with my inputs. I was fortunate to have SCCA National Champion Matt Direnzo as my coach at the school. With his coaching, and the fundamentals from the video games, there wasn’t much learning curve left other than getting used to the g-forces and the limits of the car. I wound up graduating the school and earned my Novice Permit.

GT Academy is a program put together by Nissan and Sony to look for Nissan’s next top driver for their factory racing program. They take the gamers and put them in real cars. The program has been proven successful with the likes of Bryan Heitkotter, Steve Doherty, Nick McMillen and Nicholas Hammann.

Gran Turismo was and still is an important part of my amateur racing career since I only raced the minimum of twice a year, to keep my competition license. When I was age-eligible for GT Academy, I gave it my best shot and qualified for national finals in Nashville. When I got to Nashville, we competed in virtual racing, had an interview with Nissan Motorsports USA, took part in physical challenges, and an autocross/road course combination at Nashville Speedway. They wound up choosing the top six contestants from the event including Vladimir Skirda, Armen Aghakhan, Tyler Utley, JT Lauro, Ryan Lynch and me. We were going to the Silverstone Circuit to compete for GT Academy International 2015.

When we arrived at GT Academy it was completely different from past events. On the Day One, we went to PalmerSport at Bedford Autodrome. We drove F3000 cars, Palmer Jaguar JP-LMs, Nissan GTRs and Caterham 7 Superlights. It was a lot of driving and a lot of fun. We were also introduced to our mentor Andrew Comrie-Picard, a professional rally driver and stunt man.

Day Two, was full of media pictures and an Urban Ninja competition. Day Three, was a Ken Block-style gymkhana challenge that involved a slalom drifting around barrels, drifting under shipping containers, drifting between tanks all while getting shot by paintballs at the same time. We did this matched up against fellow competitors head-to-head on a mirrored track, X Games style.

Day Four, involved buggy racing at a quarry in the middle of nowhere. I won that event, giving myself immunity. Also on Day Four, we camped out in the Silverstone woods for as part of a team-building activity.

Day Five included practice for the final race on the Stowe Circuit at Silverstone with 370Z racecars for about a 30 minutes, with instruction. At the end of the day, we had a 20-minute endurance race at Northampton Speedway in old Nissan Micras to set the starting grid for the final race. This race included at least one driver change. Ryan Lynch – another American in the competition - and I came from the back of the pack to finish second.

Day Six, this was the final day pitting me against Lynch. We had about an hour of track time, with instruction, before the decision was made.

The final decision was made by a panel, including Andrew Comrie-Picard. The decision was made on the basis of car control. I had been consistently the fastest of all the countries. But, fellow SCCA member, and now friend, Ryan Lynch was chosen to represent the United State in the final race.

I can apply a lot of what I learned from this experience. I was instructed by high-level drivers, in many different kinds of cars. I also created some good contacts, competed against some good guys and drove on the Silverstone Circuit! This was an experience of a lifetime and I plan on moving forward with my racing career. This experience will also be shared with the public on the Velocity Channel, sometime in December.

Thanks for reading,
Max King