First Solo in OVER THIRTY YEARS 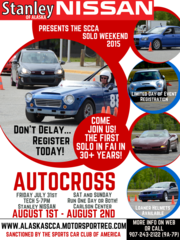 The Arctic Alaska Region is so damn proud that we are headed to Fairbanks over the August 1-2nd, 2015 weekend for the first autocross there in well over thirty years! We have had interest by many, yet it was not until the determination of Michael and April White to keep on the mission given by our RE that we found a site. We did hold two events in Nenana, yet that is the closest we have gotten!

With the support of Stanley of Alaska NISSAN, we are bringing an unknown sport to an eager crowd! Registrations are currently at 18 and with the willing commitment to the Regions' Solo program, I am so very proud of our Solo Team making this happening — Polly-Beth, Al, David, Frank, Bill, Kevin, and John!

While no biggie for those in the Lower 48, the trek is 360 miles (and major road construction) for those going north and after three great days of Solo...there are 360 miles to get back home. This is a serious commitment for a weekend event to an unknown venue, yet we know we'll find fellow motorsport family at the end of our trek!

Not doing anything August 1-2nd — Come Join Us!